Sacrificing For The Good Of Humanity 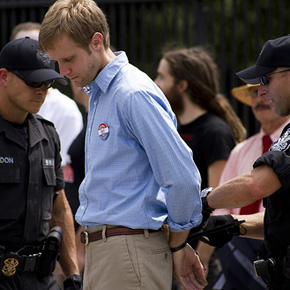 Some people cannot sit idly by while issues of paramount importance to them are being discussed and debated in the halls of Government. There are those who walk among us that stand up and make brave sacrifices so the rest of us can reap the rewards of their sacrifice as we comfortably go about our days.

This weekend in Washington, DC, an organized demonstration began that has the potential to alter the course of humanity. Yes, it’s that important.  I hope you will take a few minutes to read about it and honor the sacrifice that others are making this very minute on our collective behalf.

Protesters in DC, including my good friend and fellow World Domination Summit sister, Jessica Chapin, are attempting to de-fuse the ticking time bomb called the Keystone XL tar sands oil pipeline by risking arrest at a coordinated sit-in in front of the White House. The peaceful demonstration includes people from around the country that have put their bodies on the front line of this battle in order to put pressure on President Obama to deny the permit for this disastrous proposed pipeline. As I write this from the comfort of my home in Atlanta, Jessica is sitting in a DC jail awaiting release sometime on Monday. She was the second person arrested in Saturday’s sit-in, and is joined by 65 other brave individuals that have said enough is enough. These people believe what CREDO poignantly stated last month: We. Must. Stop. This.

I watched Jessica’s arrest live Saturday morning and could not be more grateful and proud of her action. I spoke with her on Thursday before she left for DC. We talked about the Keystone XL issue and how critical it is to our country and the future of our planet that we stop this pipeline project. We don’t have the luxury of a do-over if we get this wrong.

See, we have a big problem. Our society is addicted to an unsustainable, highly polluting, politically distorting and filthy source of energy. Oil. Like junkies with a bad meth habit, we seem to be willing to go to whatever lengths available to us to get our next fix. And just like a meth junkie, the next fix brings us closer and closer to the crash that always comes.  For us, the next fix is tar sands oil from Alberta, Canada, which is dirtier, more toxic, and much more carbon-intensive than traditional crude oil. The Keystone XL pipeline is the equivalent of a huge needle for us to mainline this filthy oil straight into the vein along the Texas Gulf coast. Not good news at all!

I’ve written about the issue over at Change.org where I’m working with the Ian Somerhalder Foundation on a petition to stop Keystone XL, so I won’t get into all of the pipeline specifics here. I truly hope you will click over, read the overview and sign the petition. And if you know any Youth that want to get involved, the IS Foundation is also organizing a video campaign so those under 18 can have their voices heard as well. Check it out here.

I’m posing this question today: if people are willing to sit in jail over this issue, can you take a minute to read about why and sign a petition?

If you feel moved to take additional action, check out the Tar Sands Action website that has information about the organized demonstration and volunteer opportunities.

Most importantly, please, please, PLEASE share this with your friends, followers, etc. The more people know about this issue, the greater the chance we have of blocking the permit.  Luckily, President Obama is the final decision-maker, and it does not require Congressional wrangling. The President said himself

“For the sake of our economy, our security, and the future of our planet, we must end the age of oil in our time.” – Barack Obama

Please stand with me today as we hold the President accountable for his position, and let’s honor the sacrifice that our fellow citizens have made on our behalf.

You can show your support by adding your name today.

Thank you for doing your part, and special thanks to the people who sit in jail tonight so that we can realize a clean energy future for our planet. Your sacrifice is greatly appreciated!

p.s. if you want to see more, Dirty Oil is an excellent documentary that shows the realities of Tar Sands Oil production. You can watch it free on YouTube here.

The Edge Of The Cliff