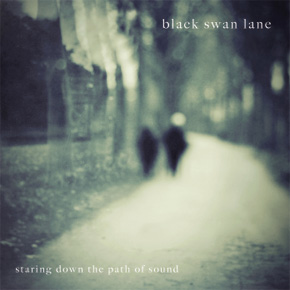 It’s been a week of great music.  I wrote about the phenomenal David Gray concert I attended on Tuesday, but there was a lot more musically that I wanted to highlight.

Thursday night, I went up to the lake to work on my friend Jack’s CD artwork for the soon-to-be-released Black Swan Lane album, Staring Down the Path of Sound.  Jack has been a friend and a client of mine for 10 years, but it wasn’t until this recent release that he let me participate in the creation of one of his albums.

Over the past year or so, I’ve been listening to rough cuts of songs from the band and giving him feedback that has helped shape the final selections on the album.  I can honestly say that this latest collection is exceptional, and I’m really excited about its potential to be a real breakthrough for BSL.

I never played an instrument growing up, but I’ve always been close to musicians and producers. Still, there is something about being invited to play a part of someone’s creation that is humbling and exciting all at once. Even more special is floating out on the lake with Jack playing the acoustic guitar while we both sing along.  Magical, really.

Today, I discovered two albums that I didn’t know I had in my iTunes library.  Toro y Moi and Bitcrush have both been lovely surprises on this Sunday afternoon. I need these little reminders that there are hidden gems tucked away in the archives that I need to explore from time to time.

I’ve been thinking all week how thankful I am to have such incredible music in my life. Looking back on the past 3 decades, music has always played a big part in everything I’ve done. Music shaped my career and ultimately helped make me the person I am today.

So here on this beautiful Sunday evening, I would like to give a big thanks to all the musicians that have played a part in bringing me to this point in time. And of course, a special thanks to Jack and John from Black Swan Lane for letting me play a small part in their newest creation.

How does music impact your life? Care to share any musical gems you’ve discovered?