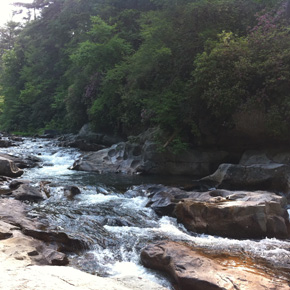 Have you ever felt like you were ‘in the flow’ and great things were just happening, without any input of prodding on your end? That’s the way life has felt for me these past couple of months.

There have been times that it’s felt like my head was going to explode with all the amazing things going on, but I’ve been taking it in stride and continued to receive more of it.

This week, I’ll be announcing a new documentary initiative that is a continuation of the work that began along the Gulf coast in July 2010. The story of the BP oil spill and its impacts on local communities, kids and families continues to unfold and I’ve been incredibly fortunate to connect with some wonderful people who are still dedicated to sharing more of these stories with the world.

Last year when I first thought about going to the coast, I could scarcely imagine the synergies that would develop as a result of this ongoing work. I certainly never expected to be making films or working on educational programs for kids. But, that’s exactly where things have led.

Through that work, I’ve aligned with some remarkable people who are making a big positive impact on the world. It has been an honor to connect with Ian, Kim, and the entire team over at the Ian Somerhalder Foundation, and the work we are all doing together is incredibly exciting in its ability to energize kids and youth in the US and beyond. I’ve connected with Bill, Jamie, and Duncan from 350.org and helped spread the word about the Tar Sands/Keystone XL pipeline movement, which is an issue that’s incredibly important to me.

Devon from the ISF Kids Army contacted me and wanted to work together to help along the Gulf coast with the oil spill this Fall, and out of that conversation, the documentary referenced above began to take shape.

I met Leigh and Adam from The Know Better Effect at the premiere here in Atlanta earlier this year, and we are all working together to produce the film on the coast later this year.

Simone Lipscomb and I met and became great friends, and we continue to share experiences along the Gulf and take what we’ve learned to bring awareness to how our actions impact the world around us. To date, this has been one of the strongest friendships I’ve ever formed in my life, and I feel like we’ve known each other since birth. It was like that the day we met, just a few months ago.

Some have suggested that I’ve ‘done the work’ or taken some kind of action that has led to these opportunities, but it feels more like the work is moving through me.

Yes, there has been action. Yes, I’ve put a lot of time, energy, effort, brain power, etc. into the things that I believe in. But, I believe that the most powerful connections that are translating into meaningful impacts are the ones where I just showed up with my true self and became ready to serve and also to receive.

Sounds too good to be true, doesn’t it? I think so too. But, that doesn’t change the fact that it’s happening.

Every day as more and more amazing things come together, I say to myself ‘just stay in the flow and continue to receive it.’ Sometimes it’s enough to blow my mind, and maybe that’s just what I need.

Either way, I’m here and ready to receive more.

What about you? How do you handle ‘going with the flow?’ I’d love to hear your stories in the comments.

The Edge Of The Cliff