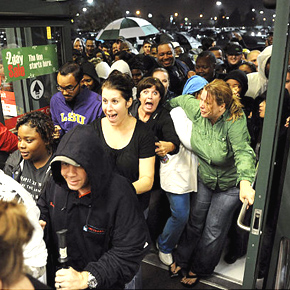 “A national holiday celebrated as a day of feasting and giving thanks for divine favors or goodness, observed on the fourth Thursday of November in the U.S. and in Canada on the second Monday of October.”

That’s the definition according to Dictionary.com.

Nowhere in there does it mention rushing out of the family dinner to stand with a mob of people who are waiting to stampede into Walmart and other retailers for ‘deals’ that are just too good to pass up.

I’m beyond disturbed by what has somehow become construed as normal behavior in the United States during the holiday season. ‘Black Friday’ was a big topic of conversation at our small Thanksgiving dinner this year. My sister and her boyfriend both work in retail, and although my sister wasn’t going in at midnight (this year), her boyfriend was.

I happened to drive past a Walmart Thursday night at 10:15pm, and the parking lot was overflowing and people were parking across the street.

Think about that for a second.

It was Thanksgiving night, and instead of spending time with family, people were practically rioting in Walmart over $2 waffle makers.

But that’s not all – in one Walmart store, a riot over Xbox ended up with people being pepper sprayed by a fellow shopper that somehow rationalized that it was OK to mace others so that she could get a deal on a video game.

This is completely out of control!

Each year, this obsession with shopping and ‘saving money’ on Black Friday gets more and more ridiculous. The spirit of the holiday season has become so perverted that I doubt people even think about why they are stampeding through retail stores across the country and fighting with each other for products that people probably don’t need anyway.

Since when does giving thanks and showing people we care involve out of control behavior like this?

Does the recipient of the waffle maker or Xbox appreciate the fact that people were trampled and some even pepper sprayed in order for a novel kitchen gadget or video game to be under the tree this year?

Does that same recipient think about the hundreds of thousands of retail employees that missed out on Thanksgiving with their families so that the stores could be open a few hours earlier for bargain-obsessed consumers?

What about the people who instead of spending time with family, they were camped out on the sidewalks of the big box retailers? What kind of message is that sending to their family about what’s really important in life?

How about we show thanks and love for our friends and family by being present, not giving presents? (hat tip to Jonathan Fields)

How about we take the time to do something for the people we love that has much more meaning than ‘stuff’ that will likely be collecting dust within a couple of weeks anyway?

What if instead of buying things for people this year, we asked them what their favorite charity is and gave a donation on their behalf instead? Better yet, what if we invited them to go down and volunteer in person with us?

My buddy Devon (the 7-year-old) made a great little video slide show that I think captures the madness of this phenomenon quite well.  Take a look if you have a minute or two.

Today, I’m grateful that people like Devon have seen through the millions of dollars in advertising that has whipped so many of our citizens into a frenzy and seen it for what it is – hype.

Not love. Not gratitude. Hype.

Thank you, Devon. I hope many others will watch your video and really think about what this insane behavior says about our society’s obsession with shopping and the lack of civility toward each other overall.

What do you think about this? Have you considered an alternative to the traditional shopping bonanza this season? How do you show your thanks and love to friends and family during the holidays?