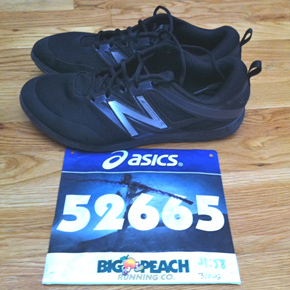 1 week ago, I did something that I could barely imagine just a month or so ago – I ran a 5K fun run for the Atlanta Community Food Bank in a brisk 21 minutes an 58 seconds.

The annual Hunger Walk/Run is something I’ve participated in for many years, but this year, I donned a pair of running shoes and a determination to push myself further than I had ever gone before.

I wrote about my reasons for not running before in an earlier post, and in all honesty I was still slightly unsure of how my endurance would hold out in the actual run. Last Sunday at 2pm, the starting gun was fired and off we went – hundreds or perhaps thousands of runners all took off in an effort to assist in the alleviation of hunger and poverty in Georgia. Some, like me, did it for exercise, while others did it to race their friends and family.
I quickly found myself running at a faster pace than I have started out with lately. A mile into the race, I was feeling great and had definitely hit my stride. I kept pushing and was catching up with Matthew and Nick, who I started with and who had pulled ahead early on. Both of my running mates were much younger and had been running for years; they were the clear favorites to outpace me. On the last mile, I ran past Nick and was gaining consistently on Matthew, who was totally oblivious to my presence at his heels. At the end of the run, I clocked in just 4 seconds behind Matthew. I wish I could have captured the expression on his face when I tapped his shoulder and he saw I had completed the race right begin him – the look of shock compounded the sense of accomplishment I felt in running the race for the first time with such a respectable pace.

This experience has opened my mind to new ideas about what I’m physically capable of and despite my relative slow start at getting into running, it feels like I am finding a new zone.

In 1973, Pink Floyd wrote a song called Time, which has one of the most important messages of any song I’ve heard before. Here are some of the more poignant lyrics:

Tired of lying in the sunshine
Staying home to watch the rain
You are young and life is long
And there is time to kill today.

And then one day you find
Ten years have got behind you
No one told you when to run
You missed the starting gun.

Consider the meaning behind those lyrics for a moment. What does it bring up for you?

What starting gun are you waiting for?

Also, you can still donate to my Hunger Walk/Run campaign if you would like.  Online donations are accepted through March. 31. Thanks! 🙂

Doing the thing you think you cannot do