How Do You Connect? 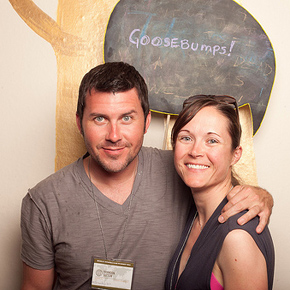 2011 is almost over, and it seems like a good time to reflect back on the year and look at some of the ways we have grown increasingly connected to each other and the world we live in.  Interconnectedness is a big topic for me and I look forward to hearing what others think about this.

In 2011, I connected with more people through Twitter than in any other online medium, but I also noticed more engagement here on my blog as well. Interestingly, I felt an overall reduction in engagement on Facebook, despite the fact that it’s such a behemoth in the social world.

Google+ came into the picture in the Summer, and after some initial excitement, I have used this network very little to connect with people lately. I keep thinking that’s going to change when I ‘have more time,’ but so far it hasn’t happened.

Perhaps most notably, 2011 was a year of in-person connections more than any other year I can remember. Many (if not most) of the people that I’m actively collaborating with on new work and personal pursuits I met through events or personal meetings. Here are a few highlights: January, 2011 – UGA Building Bridges in Crisis / Oil Spill Symposium – I had a chance to hear and meet Sylvia Earle, Samantha Joye, Joseph Montoya, and a multitude of other scientists, writers, officials, etc. that had direct involvement in the oil spill. This continues to lead to opportunities to help share the story about the oil spill and its ongoing impacts.

March 2011 – Kim Klingler – Executive Director of the IS Foundation – I met Kim during her visit to Atlanta in what was one of the best first meetings I’ve ever had. She and I hit it off immediately and began an amazing working relationship together that has helped launch Kids of the Gulf and is building toward even more great work in 2012.

April 2011 – EarthShare breakfast in Atlanta – I was honored to attend this annual benefit gathering of environmentalists, where I met some dedicated people that have mutual interest in the story of the Gulf oil spill. After that breakfast, I traveled to the Gulf to meet up with my friend Simone for the 1-year anniversary of the Deepwater Horizon explosion. During that visit, I gained valuable perspectives regarding the ongoing struggles throughout the region.

June 2011 – World Domination Summit in Portland – This was definitely a turning point for me. I have never been around so many amazing people all in one room before, and it was truly the most inspiring event of the year for me. 500 people from all over the world showed up and shared their spirit for game-changing life and career pursuits with each other. Several of the people I met are some of my closest friends and confidants now.

September and November 2011 – Tar Sands Action in Washington DC – After years of mainly ‘armchair activism,’ I felt compelled to participate in the DC demonstrations to deny the Keystone XL pipeline permit. Through this work, I met some incredible people who are now some of my biggest allies in my work on Kids of the Gulf. September’s demonstration was also my first in-person meeting with my buddy and overall inspiration, Devon Haas.

October 2011 – Ian Somerhalder Foundation Benefit in Atlanta – This was the first event where I had a chance to meet all the incredible people with ISF that I had been working with remotely for months. It was also my first time meeting Devin Beach in person, and seeing a lot of the Kids Army kids together was a huge inspiration.

These are some of the bigger highlights of the year in terms of in-person meetings. I thought it was relevant to share these here to show how important the connections can be in the real world as a complement to the relationships we nurture in social channels.

All of the examples above grew out of some form of connection in social or digital channels. We are in an era of unprecedented opportunity to connect with others and share information that inspires us, but let us not forget that in the end, physical connections can magnify the power of online relationships and bring about positive changes on a much larger scale.

If you’re spending a lot of time building online relationships, I encourage you to also take advantage of the opportunities to meet up with your network in real life. And if none exist in your area, why not create one yourself?  Chris Guillebeau did and now there are thousands of people waiting for a handful of available tickets to next year’s World Domination Summit.

What do you think? How do you connect with your network?