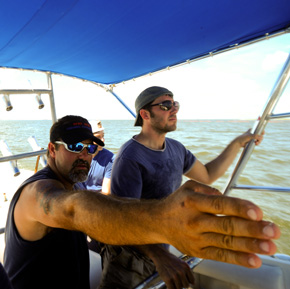 Going all in is a concept that continues to come up as I move through my journey. I’ve been hearing it over and over again by very inspiring people that I greatly admire.

Most recently, I attended a talk by Pete Bethune last night, where he talked about leadership, risk, and doing things that make a big impact in the world.  Pete is the man that decided he wanted to break the world record for circumnavigating the globe in a powerboat.  But not just any powerboat, one that was fueled 100% by biodiesel.  My kind of guy!

Pete’s story is a remarkable example of an individual that embarked on a quest and learned so much along the way that it has altered the trajectory of not only his life, but the lives of countless people and animals the world over. 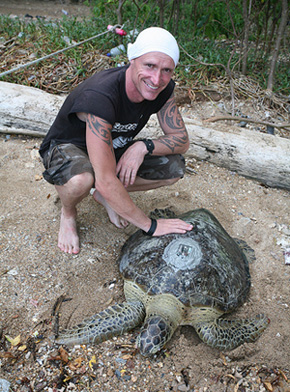 He discovered what a problem illegal fishing is in many areas of the world and decided to make it his mission to go all in to educate the world on the importance of marine conservation. He’s gearing up to do a TV series that will shine a light on this critical issue so that governments will put a stop to illegal fishing.  Not exactly small thinking.

But this post isn’t about Pete.  And it’s not about marine conservation.

This post is about going for it when you believe in something strongly.

When I look back at my life and reflect on the pivotal moments of decision making, I can say with confidence that I’ve been the type of person to go for it all the way when I believe in something.

And the thing is, it’s messy.

It’s not fairy-tale like where everything comes together the way I expect it to happen. It’s scary and uncomfortable, and sometimes I don’t know how I’m going to stay on course.

But things always come together to propel me further along the path.

Last night as he spoke, Pete discussed some of the challenges that popped up along the way during his Earthrace initiative.  As he put it, you don’t set world records and travel immense distances across the ocean without problems.  It’s the way you handle those problems when they come up that determines if you succeed or not.  He also talked about financial concerns and the fact that sometimes you have to take a leap and have faith that the money will be there.

I must have been in another world when I read the invitation to the talk, because I thought I was going to get to hear from a well-known environmentalist and conservationist about his story.  I had no idea that he was going to be giving a kick ass lesson in leadership, entrepreneurship, and following your calling in life despite all odds.

This was echoing through my head all night and when I woke up this morning.

I’ve written about this before, but there is a direction that I feel called to follow, which is something I’ve never done before in my life.  I believe I’m here to share my story of personal growth and transformation into an environmental and social justice advocate with others around the world who have the same potential within them to become advocates in their communities.  If I can do it, anyone can.

Looking back on how I’ve changed and grown as a citizen and an advocate for change, I’m sort of blown away by just how far I’ve come.  When I think back to my reaction to the oil spill last summer and the unyielding desire to make a difference somehow, I can smile with the knowing that I made a difference. In short, I was in – all the way.  I pushed myself and got into situations that were completely foreign to me.  I learned. But most importantly, I didn’t retreat from any of it.

‘The Wright Brothers didn’t have a pilot’s license.’

My good friend Jeff Duvall told me this last Fall when I was planning the public exhibition for Spirit of the Gulf Coast at Georgia Tech.  This was his way of giving me props for just doing it.  I didn’t ask permission to go down to the Gulf and interview local people in communities that had been devastated by the spill.  I didn’t have a degree in film making, sociology, environmental science, or saving the world.

What I did have is a passion to make a difference in this world.

I learn so much from people I interact with every day.  I have a page of notes from Pete’s talk last night, and there are pages and pages of notes and inspiring thoughts from the World Domination summit 2 weeks ago.  There is so much to learn every day if we are willing to listen.

In the end, the biggest lesson through all of this is to go for it, all the way. Half measures won’t cut it.  It’s all or nothing. I’ve bet my future on having a positive impact on humanity and the earth that we inhabit.  The way this manifests is fluid and evolving.

But this is me.  This is Who I Really Am.

I’m so thankful that I’ve been able to connect with other incredible change makers in the world that are out there making things happen and showing the world that there is a future ahead that can be brighter for all of us if we pay attention to what’s happening and work together.

I’m here to learn, grow, and connect with others who are on this journey of making positive contributions to humanity and the planet. It’s an incredible experience, and it feels absolutely amazing!

What does this bring up for you?  Are you going for your dreams all in?