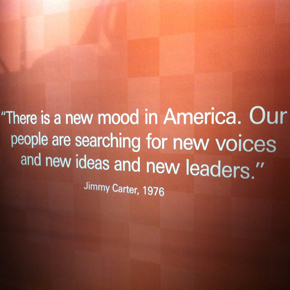 The original plan was for this week to be a ‘writing retreat,’ but I’m pretty far away from that goal so far. I’m sitting in my friend’s house in the suburbs while he and his family are out of town and remembering what life was like out here.

Despite my assurances to get back into a more frequent posting schedule, it hasn’t played out that way. Now I know why Chris Guillebeau is so militant with his post schedule.  Once you slip, it’s over.

Gretchen Rubin posted this quote today for The Happiness Project and it really resonated with me:

“Failure after long perseverance is much grander than never to have a striving good enough to be a called failure.”
— George Eliot

The truth is, I’ve been persevering on other fronts, and if my blog posting schedule is the biggest failure, I’ll take it.

If you’ve been following my writing for a while, you know that I’ve put a lot of emphasis on my work along the Gulf of Mexico in the aftermath of the BP oil spill. It’s been hands down the most rewarding work that I’ve ever done in my life.

Between last Friday and this Monday, I was able to sit down with 4 Ph.D subject matter experts that provided some excellent material for Kids of the Gulf, the new film I’m working on. The thing that blows me away about this work is that everyone is saying yes. I have yet to ask someone to do an interview or get involved somehow that has said no.  It’s quite humbling.

Perhaps people see the power that lies within these kids.  Maybe they are coming to realize that the world is in desperate need of people who are willing to go way outside of their comfort zones to make a difference and change things.

It’s not hard to build the case that massive change is not only necessary, but is currently underway. In my lifetime, there has never been this level of outrage amongst US citizens for the inequality that has left millions of people with shattered dreams and a sense of resentment toward ‘the system.’

People protesting in the streets, occupying local parks, and other signs of discontent have become commonplace recently.  The incident on the UC Davis campus where students who were peacefully demonstrating were pepper sprayed at point blank range, coupled with similar incidents in NYC, Seattle, and Denver, have fueled intense outrage among people who are fed up with business as usual.

Regardless of your political affiliations or your views on the Occupy movement, it’s not hard to conclude that there is a shift underway that is well beyond a handful of idealistic students. Around the world, riots and demonstrations continue, and despite police attempts to deter people from taking to the streets, they have not been deterred.

Last year, I gave a talk at UGA on Social Media and Social Causes, and one of the things that was a cornerstone of the discussion was that social media alone cannot force big social changes, but it can be used to mobilize and organize people. That’s what we are seeing now, and I believe that kids like Devon and Devin are realizing the power they have to spread their message of engaged activism to the rest of the world.

If you’re interested in following along as we continue on this journey, we have a new video up on our IndieGoGo page. It’s a highlights reel from the Ian Somerhalder Foundation benefit in October.

I’m curious – why do you think people are saying yes to our efforts on Kids of the Gulf? Do you see a link between that support and the Occupy movement? Do you feel that ‘Occupy’ has the potential to bring about positive changes?