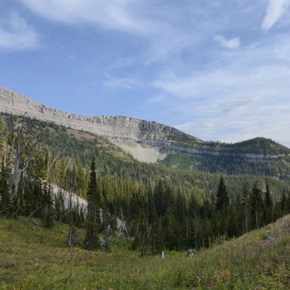 I had the incredible fortune to spend 5 days in the Bob Marshall Wilderness (known to locals as ‘The Bob’) after my Climate Hike in Glacier National Park in August. It turns out that flying to Montana is pretty expensive, so I wanted to get the most out of my investment. I’m so happy I did!

The experience hiking in the remote Montana wilderness is something I’ll always cherish. I journaled each night before bed in an effort to capture the experience as I was feeling it at the time. This post chronicles the first 2 days of my 5-day journey.

For context, I was completely alone on this trip. I packed everything in (including an insane amount of food), and was totally self-sufficient. I had never backpacked that long on my own before, and it was an incredible experience! Special thanks to Patrick from Climate Ride, and Vince, Jeff and Morica from Glacier Guides for the great advice on The Bob. Their help was invaluable!

I hope you enjoy the trip recap and photos. The full Flickr album can be viewed here.

Day 1
I got to the Silvertip trailhead just after 6pm and hiked 4 miles along the Spotted Bear River to the junction at Dean Creek where I set up camp for the night. Morica from Glacier Guides told me about the site, which was a really nice site next to the creek with plenty of space to spread out. I cooked some dinner with the sound of Dean Creek babbling in the background and started to read the Natural Navigator book that Laura gave me in Glacier. The book is about navigating with the elements alone. Definitely an interesting topic for me. Just as night fell, I hung the bear bag and went inside the tent to get some sleep. I slept with the rain fly off and saw a few stars and a passing satellite, but I was pretty wiped out and went to sleep pretty quickly. 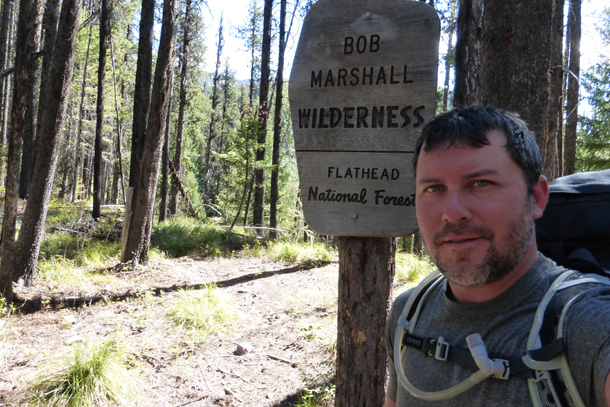 Crossing from the Great Bear Wilderness into the Bob Marshall Wilderness 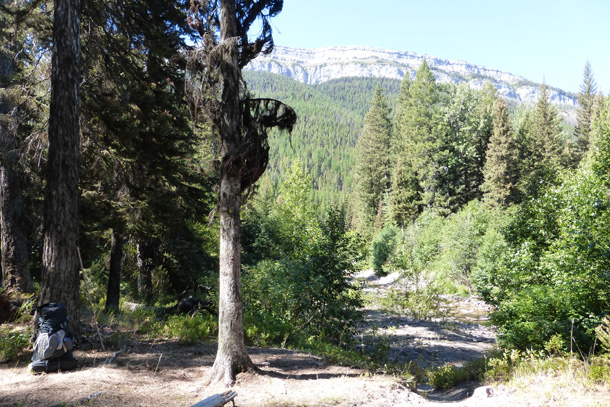 Campsite next to Dean Creek

Day 2
I awoke in no hurry (what’s the point in that?) and enjoyed coming out of my restful state along Dean Creek where I made some breakfast and coffee. I haven’t been keeping up with time on this trip, so I’ve taken things at a natural pace. After breakfast, I packed up the site and headed east along The Spotted Bear River and past Dean Falls. The falls looked beautiful, but there was no apparently easy access to them, so I elected to keep moving toward The Pentagon cabin. I told myself that I would get closer to the falls on my return trip when the pack would be lighter and I would have a better sense of my trip flow. 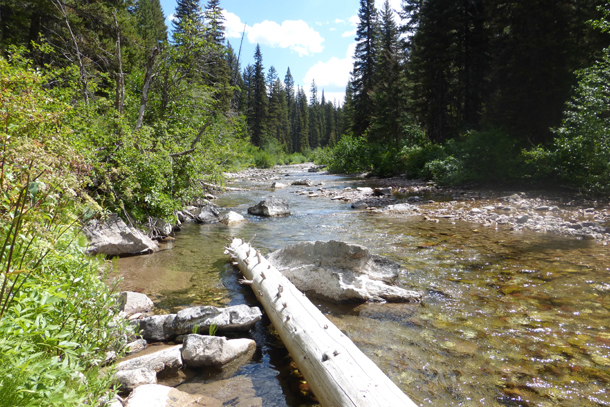 I arrived at Pentagon cabin and found that it is apparently a horse camp used by the Forest Service and was locked up with a no trespassing sign prominently placed. I walked down to the river behind the cabin to pump some water in my Nalgene as a backup to the drinking water in my hydration bladder. I knew there were some dry runs ahead and didn’t want to get caught unprepared.

Lunch beside the cabin was uneventful but I did hear some people and a dog beside the river. I decided to give them space and saw them only as they were leaving for the trail that I would soon follow.

The Pentagon Creek trail started out with a steady climb and after a few minutes, I passed Carl, Patricia, their son, and Lucky the black German Shepherd who were all heading to Switchback Pass. I continued on and soon crossed Pentagon Creek where the boots came off and the Chacos went on for the soggy but shallow crossing. I decided to keep the boots off for a few minutes in case their were other crossings nearby. 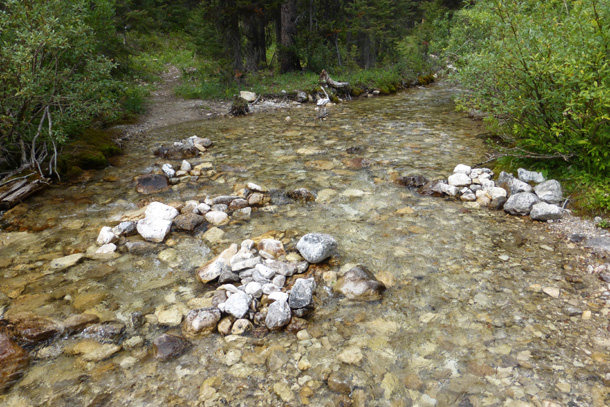 Shortly afterward, the sound of air bubbles in my drinking tube alerted me that my water bladder was empty. I was somewhat surprised because I didn’t think I was drinking that much water, but evidently I had already taken in 2+ liters thus far. I recalled one of the guides telling me that the next run along the trail was dry, so I filled everything up to capacity just in case.

The next mile or so took me alongside a dry creek bed, which is no doubt filled with rushing water during the spring melt each year. After a few crossings over the rocky bed, the trail grew tighter and more overgrown. I trod onward despite my legs getting scratched by the brush that threatened to cover the trail entirely. About that time, a storm threatened overhead and I decided to put the zip-on legs back on my hiking pants (these were a godsend the entire trip – an outstanding investment from REI) and the rain cover on my pack. It did sprinkle a bit, but never heavy enough to warrant any major protection.

I passed through a small meadow with abundant flora as the trail continued to get harder to see. It essentially became a bushwhack as it rose steadily upward to the north, but eventually it cleared up as it approached the steep pass between Pot mountain and Pentagon mountain. It was here that the first challenging climb took shape. The elevation went to from 4900 feet at pentagon cabin to 7000 feet at the rocky pass. Switchbacks along the open rocky ascent provided increasingly beautiful views of Pentagon Mountain and the valley to the southeast, but the climb was definitely taking its toll on me. I was 11 miles in at that point and was hauling 6 days worth of food on my back (note: in hindsight, I probably had about 10-12 days worth of food). I took my time, pausing often as I steadily rose to the top. 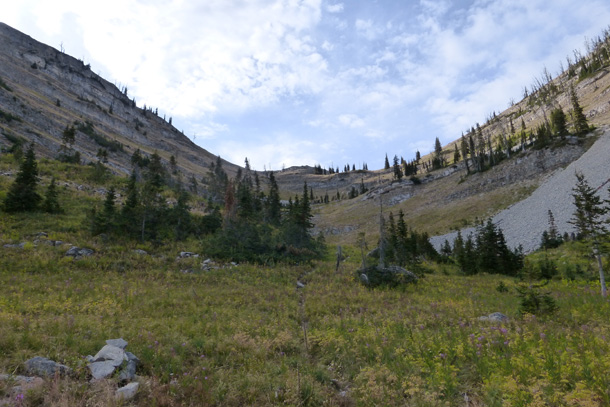 The ascent up the rocky pass

The closer I came to the top of the pass, the clearer it became that I was in for a spectacular view. It did not disappoint. 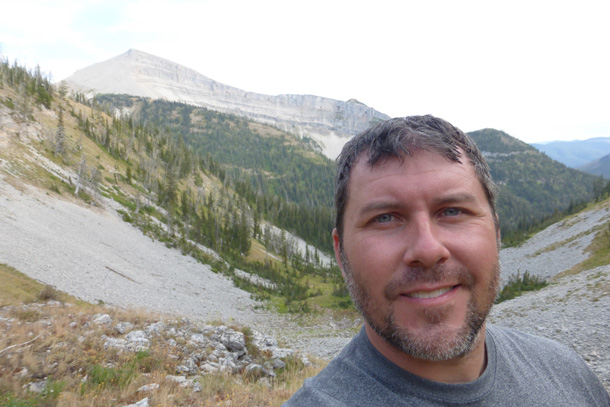 Happy to be near the top of the pass!

After the long, rocky climb, I could see Glacier Park far in the distance to the north and the expansive Bob Marshall to the south. Views of Pentagon mountain and the valley below were stunning, as were the views of the dense forest below to the north along the trail I would soon follow. 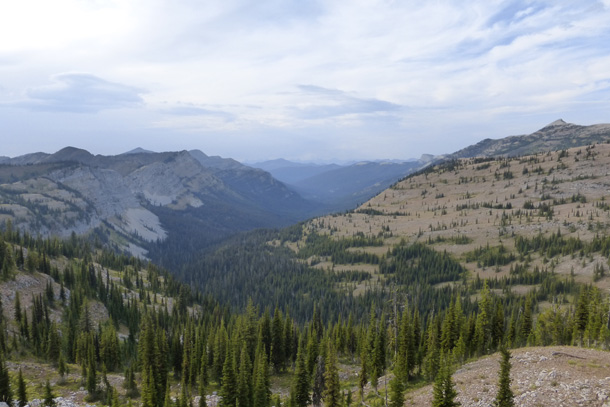 It was here that a decision had to be made. I could either look for a suitable site to camp nearby or continue the 5 mile stretch to the next trail junction. I decided to push on and stop if a site presented itself. I figured I had about 2 hours of daylight left, so I said goodbye to the spectacular vista and plunged down into the dense, wet forest.

The trail soon grew thick with overgrowth and once again I put the legs back on the pants to minimize the scratches from encroaching vegetation. As the bushwhack became more pronounced, my pants became totally soaked from the waist down. Evidently a late afternoon shower had soaked the dense vegetation and each step brought more moisture onto my clothes and the bottom of my pack. 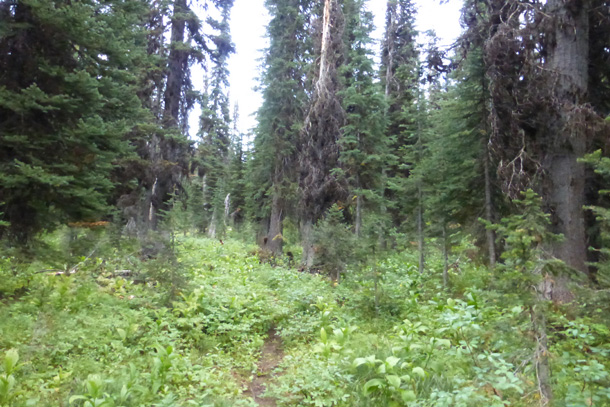 The start of what would be a wet, overgrown 5-mile trek

There was nothing suitable for a camp site on the wet, brushy trail, so I had little choice but to push through to the next junction where I hoped to find a flat spot and a creek for pumping water. Miles passed and I continued getting wetter and wetter by the minute. My boots and socks were completely waterlogged from the wet vegetation along the northbound trek. Darkness was looming and I picked up my pace as much as possible, but the slippery roots and rocks hidden by the brush became hazardous as I descended further into the valley.

My concern about hiking in the dark was due to the fact that the trail was next to impossible to see in the best conditions and I had doubts about how well I would be able to follow it at night. I eventually made it down to Dolly Varden Creek, which signaled my final approach to the next trail junction. A few open spots came into view that I noted as possible campsites if I couldn’t make it to the junction. Still I pushed on, convinced that the junction was the best option. Just as nightfall was nearly complete, I saw the trail sign ahead, but was disappointed to see no apparent campsites in the area.

After nearly 17 miles of hiking, my clothes and boots fully soaked, I was determined that I was going to find a good spot. On a hunch, I bushwhacked down away from the trail and toward the sound of fast moving water. As I approached the creek side, a wide open field and campsite came into view just as nightfall was complete. I was far too tired to cook, so I took off my boots as water poured out of them, hung the food, pitched the tent, changed into dry clothes and went to sleep.