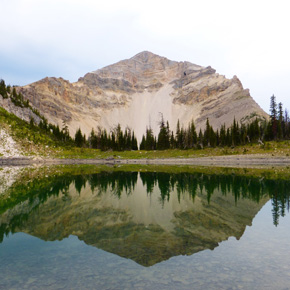 This is the third and final post of my epic adventure in the Bob Marshall Wilderness in August, 2015. The first two posts can be found here and here.

Day 5
I awoke just before sunrise and quickly got my camera out for what I knew would be a beautiful scene over the valley to the east of my campsite. I was not disappointed. The sunrise was truly magnificent! Some fog hung low along the bottom of valley and in the pockets between the mountains in all directions. I got some great photos and made breakfast while watching the valley come to life. 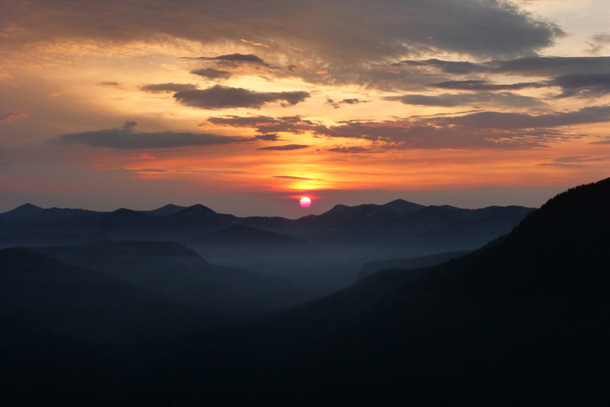 Sunrise over the valley

I decided I was going to get an early start so I would be hiking over Switchback Pass before it got hot. After I had everything almost ready, I went down to the lake to pump water for the hike, which is when I came upon a scene so beautiful I could hardly believe what I was seeing.

The water was like glass and the reflection of the trees and mountain in the perfectly still surface was just as spectacular as the sunrise! I took several photos before pumping water and disturbing the pristine water. My timing was perfect, as 5 minutes later the wind blew in with some rain and disturbed the scene. 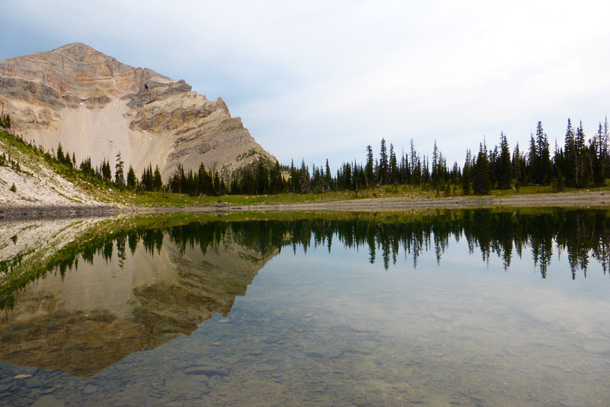 On the way back to the campsite, a couple of deer followed me with curiosity as I went back to get my pack. They hung out for a couple of minutes, but when the rain started, I was in a hurry to cover my pack and they ran off. The hike up to Switchback Pass was uneventful, but rewarding from the top. I contemplated climbing either of the mountains to the side of the pass, but the sky was looking gloomy and there was nowhere to hide at the top if a storm did form. I had already heard thunder and decided not to push my luck. 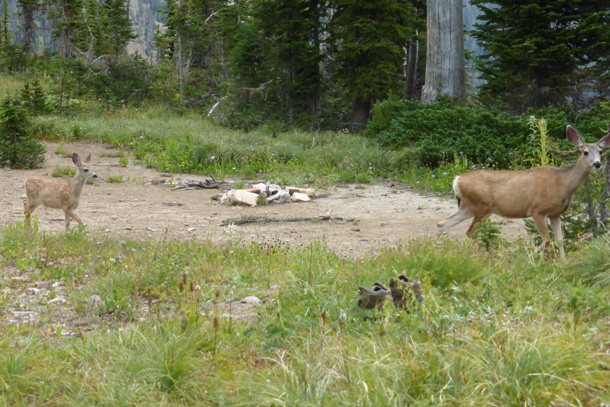 Deer in the campsite before heading out

I ran into a through hiker that was on the CDT and we chatted for a bit. I asked him if he wanted any of my food (I grossly overpacked food for this trip) and he gladly agreed. I had all my food spread out and told him he could have whatever he wanted. He offered to trade me some candy, so I took a Twix from his stash, which was basically a bag full of candy bars. I bid him farewell and ran into the family I met on day 2 and also the guys from Dean Lake shortly after. This was the busiest intersection of human contact I had the entire trip. 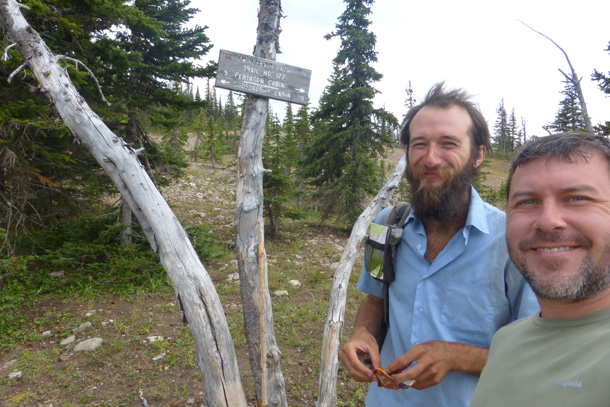 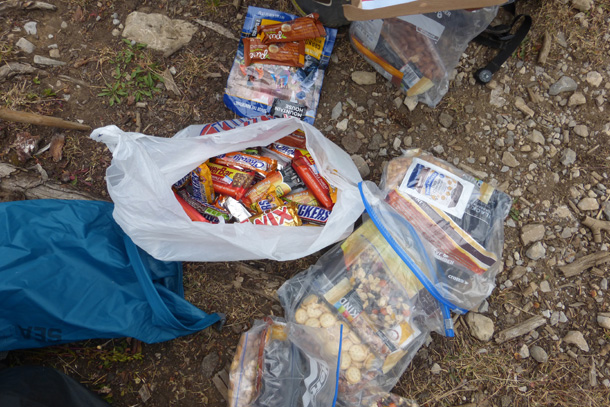 By that point, visions of cold beer and a hot shower had become too much to resist, so I made the decision to push out to the trailhead (about 16 miles from the pass). The hike down the pass was a total joy, although I could see how the hike up could be a real ball buster (4.5 miles of steady climb). I got to Pentagon Cabin around 1:30 and by that point it was quite hot. I still had over 10 miles of hiking, but along very manageable and essentially level terrain. Still, I had been hiking for 10 days and had sore feet and sore shoulders, so the last few miles were brutal. It was 90+ degrees and hiking through a burn zone provided no cover from the scorching sun.

Again, the thought of a hot meal and a Going to the Sun IPA was enough for me to push through. At any point, I could have stopped and camped for the night. I had enough food for another 3 days, but my mind was made up. I would soldier on. I stopped twice to pump more water, with the final pumping about 4 miles from the trailhead. 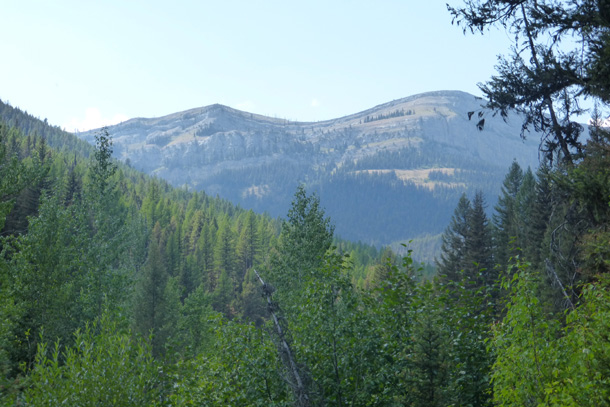 Hiking down off Switchback Pass

I’ve found that the last few miles of a backpacking trip are sometimes the toughest, and this was no exception. I was running on fumes in the last couple of miles, but determination kicked in and I pushed on. Eventually, the glisten of car bodies came into view up the hill from the trail and the sign for the Silvertip trailhead emerged. It was just after 6pm – exactly 5 days after I first stepped into the Bob. I was overjoyed that I had made it out without incident and in time to make it back to Seeley Lake to meet up with my aunt and uncle for a late dinner and drinks – nearly 4 hours away.

The experience in The Bob was one of the most incredible things I’ve ever done in my life. Sure, I’ve been backpacking and done a few solo overnight trips, but never anything of this magnitude. I suppose in some way I proved to myself that I was capable of holding my own in the wilderness, and I could certainly have stayed longer to experience more. But it was amazing the way it all unfolded and I have no regrets whatsoever. I would do it again in a heartbeat.

Adjusting to life back in civilization was a phased approach, with the next couple of days being spent in Seeley Lake and Whitefish enjoying the local Montana culture. Then, the inevitable return to Atlanta was upon me. The night before I left, a strong line of storms came through the area igniting several wildfires in this stunningly beautiful landscape. As I drove to Missoula to catch the flight home, a thick smoke had blanketed the whole valley between the majestic Rocky Mountains and the Mission mountain range off to the west.

My first observation before landing in Missoula was the smoke from the Washington state fires, and here on my final day, the smoke was its thickest of the whole 2 week period. I came to Montana to experience the Climate Hike and see how climate change had impacted the majestic Glacier National Park. What I saw blew me away beyond description. I feel more compelled than ever to do everything in my power to be a positive force for protecting the natural beauty and delicate climate we enjoy on this magnificent blue planet. So, I will continue to do my part and share this point of view with anyone who will listen.

In the month following this adventure and the writing of this trip recap, an acquaintance of mine and fellow World Domination Summit alum, Scott Dinsmore lost his life while climbing Mt. Kilimanjaro. His death shocked and saddened people around the world who were inspired by his passion and drive for ‘Living Your Legend.‘ Although I never got to know Scott, the outpouring of love by those who he touched has reminded me of how important it is to live everyday with a relentless pursuit of what matters to me.

Check out Scott’s inspiring and thought provoking  TEDx talk below:

Scott’s path has inspired people around the world to reach for life, not just accept the life that they’re given. Trips like this one to Montana are examples of how I reach for more in my life. There are plenty of reasons not to take 2 weeks off to wander in the woods. Solo backpacking in bear country, while perceived by some as dangerous and foolish, is incredibly liberating and inspiring – something that few people will ever do. I believe that the life I’m called to lead happens when there are elements of danger, risk and uncertainty involved. I know with complete certainty that Scott would agree.

During my final preparations for this trip, I was reminded that one of the biggest aspects of my calling is sharing the love and beauty in nature with others. I thank you for reading thus far and I hope this story has inspired you and perhaps even sparked an adventurous streak in you. There is much to explore on this beautiful planet and many people to share it with.

Where will you explore next and who will you share it with?