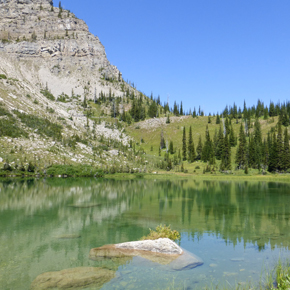 This is the second of 3 posts regarding my solo wilderness excursion in Montana’s Bob Marshall Wilderness in August 2015. Part one can be found here. My full photo stream can be viewed here.

Day 3
I awoke knowing that everything was going to be wet for a while, so I laid in the tent for a couple of hours. An empty stomach from the night before and a strong desire for hot coffee eventually motivated me to step outside. The soaking was universal; the tent, my socks and boots, and of course the dense vegetation that I would have to bushwhack through to get back to the trail. I made breakfast and coffee, then hung the food back up for the early afternoon rest while everything dried out. 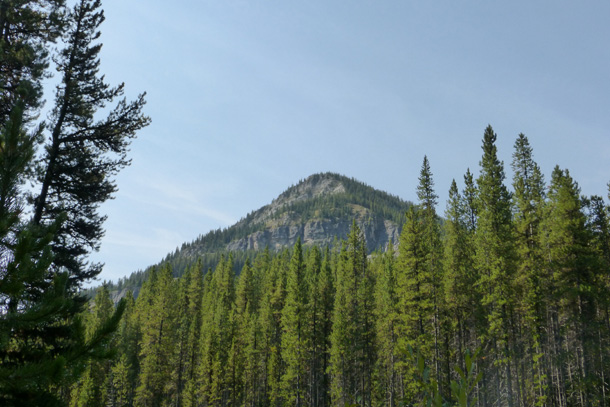 Mountain view next to the campsite 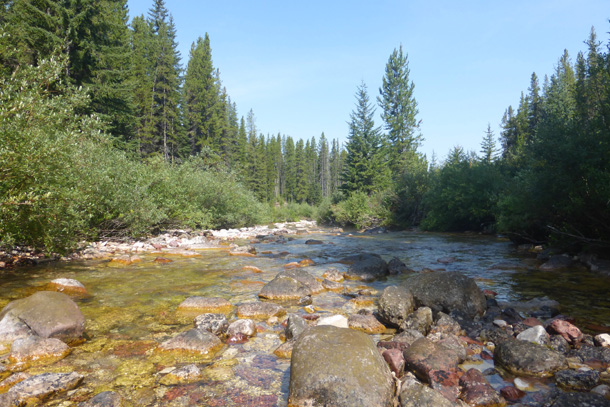 Beautiful cold creek next to the campsite. I even managed a ‘shower’ laying down in a deep spot.

Eventually, clouds threatened and I decided to pick up the pace a bit and strike camp before the storm hit. I got a few sprinkles on the way out but the brush wasn’t too wet on the way to the trail junction. The cutoff route up to Trilobite was not long, but it was a steady ascent that got steeper by the minute. The views of the lush green valley I had hiked through the night before got more and more impressive with each switchback. 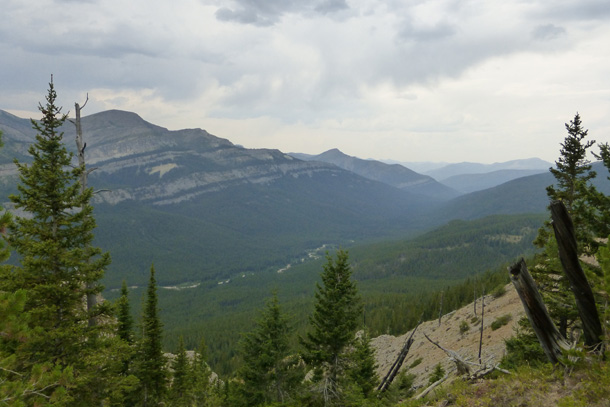 Storms continued to threaten off to the west, but I continued my climb, satisfied that I could drop the pack and take cover back down the ridge if need be. Nothing materialized from the clouds, so I pushed on. 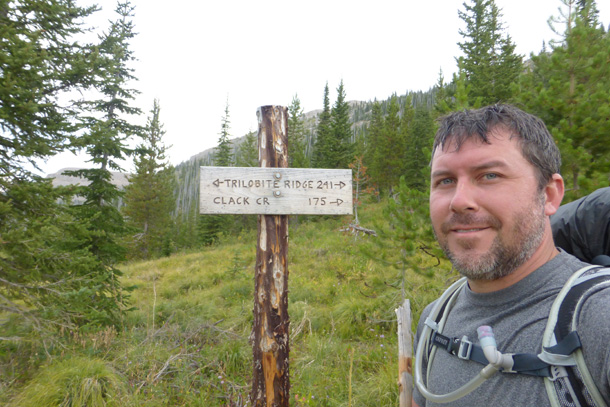 Trail junction near the top of the ridge

I met the Trilobite Ridge Trail on the west side of the ridge and had some climbing still to do to make it to the east side. The trail topped out around 7500 feet, which was a quick gain from 5200 at the creek where I struck camp; about a 2.5 mile hike. The views were quite nice, although not as dramatic as the view from the Elk Ridge the previous day. 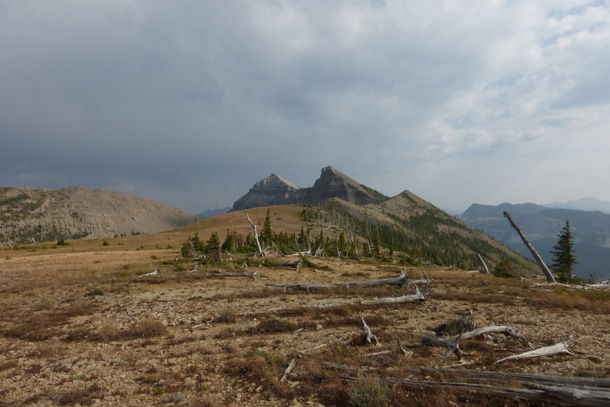 View from atop the barren ridge 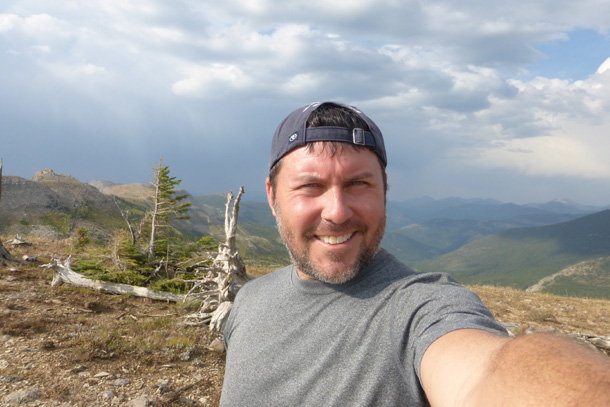 Another view from the top – Glacier is way in the background.

The descent along the eastern ridge was pleasant; two large birds flew out from a tree as I approached. Although I didn’t get a great look at them, I believe they were owls. My attention turned toward finding water and the Trilobite lakes that were shown on the map. From atop the ridge, I could see what looked like two big green fields that I suspected were dry lakes. 4 lakes in total are shown on the map, so if two were dry, I might be in a water crunch soon. 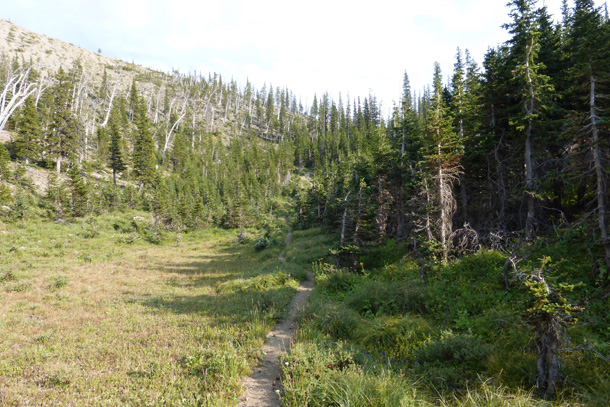 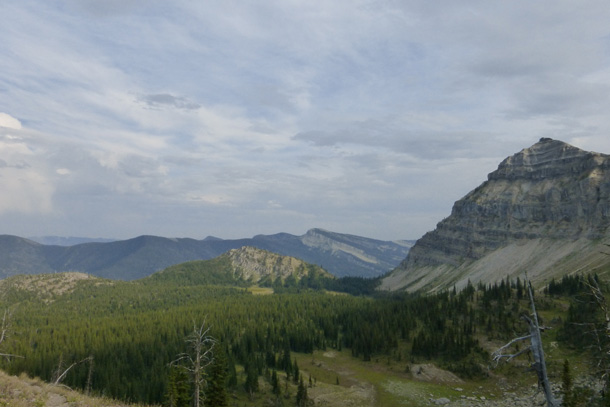 Descending into the valley – Trilobite Range off to the right

I kept descending and after a few minutes, I spotted a lake with some water and a group of 3 guys camping alongside. I mentioned that I was happy to see water and they tipped me off to the fact that there was a spring on the opposite side of what was left of the shallow lake that would be a much easier solution for pumping water. I went off in search of the spring and after a bit of scouring the area, I found it right beside the trail draining into the fledgling lake.

I got camp set up above the spring and despite some challenges with hanging the food, I got it eventually. I decided to show my appreciation to the guys by bringing some tasty treats from my food stash that continues to linger despite my best efforts to consume my allotted rations each day. I haven’t come close to eating all the food I packed, so the surplus grows by the day. It turns out that the guys are from Boston and Brooklyn and flew into Schafer to do a loop hike. We chatted for a few minutes while the wind picked up out of nowhere. I decided to bid them farewell and came back to turn in, skipping dinner, again. 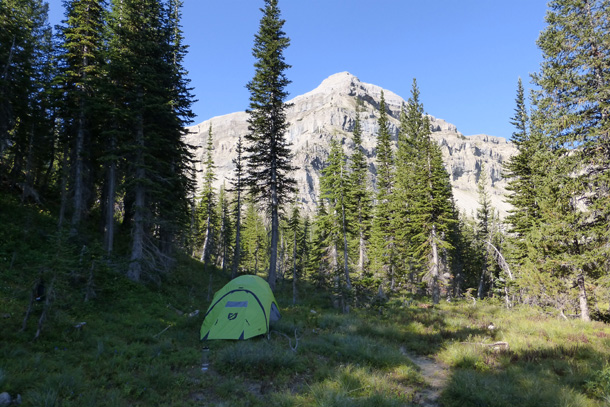 Campsite next to the Trilobite Lakes

Day 4
The morning started out uneventful. I could hear the guys across the lake strike camp and leave. I took my time, had breakfast and packed up for the day. The skies were cloudless blue and provided truly beautiful views of the Trilobite Ridge to the west. 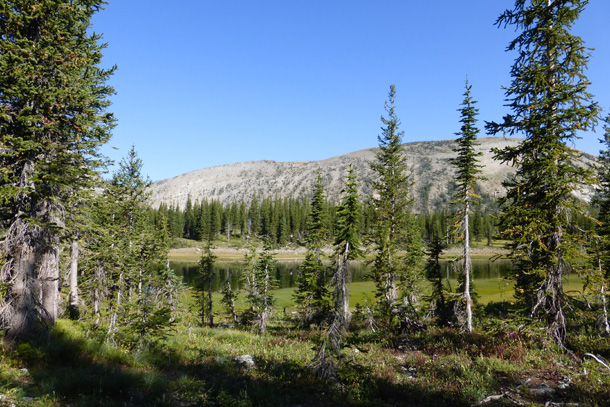 View of the lake from the campsite

By the time I had everything packed up and ready, it was late morning and the sun had really heated things up. The trail headed south along the ridge and quickly passed another stunningly beautiful lake. The water was crystal clear and although I had just started to hike, I couldn’t resist a quick dip. It was worth it!

I had been feeling a little icky and was longing for human contact and a hot shower, but the refreshing swim was just what I needed to lift my spirits. After I dried off a bit, I took to the trail once more. Side note: there is nothing more rewarding than running across lakes like this to swim in on backpacking trip where a shower is still days away. 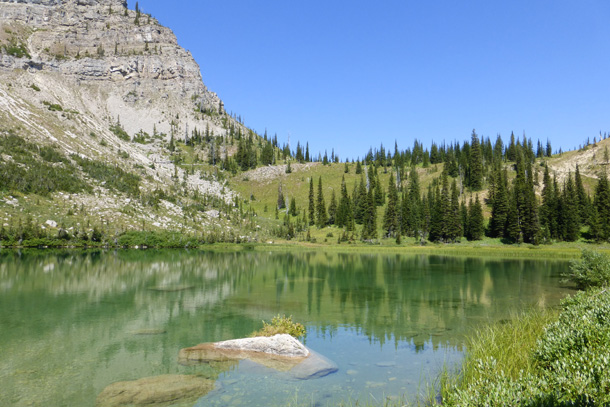 Today’s destination was Dean Lake, which was only about 6 miles away, but they would prove to be a tough 6 miles. The trail itself wasn’t terribly challenging; there were reasonable rocky descents followed by equally reasonable climbs. The temperature and direct mid-day sun, however, made things much more difficult. It was around 90 degrees for most of the hike and it really took a toll on me. I moved slowly, stopping often in a shady spot along the trail. The views were spectacular though, and I started to spot some small snow fields on the eastern face of the Trilobite Ridge.

The path meandered steadily through a previous burn area and the wind whipping through the dead trees made a whistling sound that was unforgettable. I took plenty of video of the route and caught the whistling wind on camera, I think. 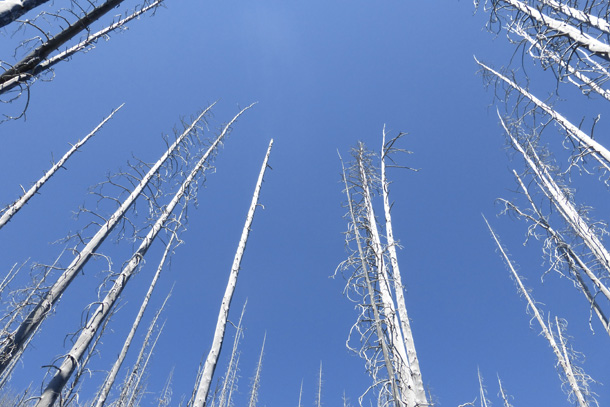 Old burned trees with a stunning blue sky above

I trod onward and eventually drank the last of the water in my hydration bladder. This is a rare thing, as I usually have more than enough for the hike, but the hot temperatures proved quite demanding. I still had a liter of water in my Nalgene, so it was not an issue. Still, I was eager to see Dean Lake for another water source and most importantly, a place to rest for the night. 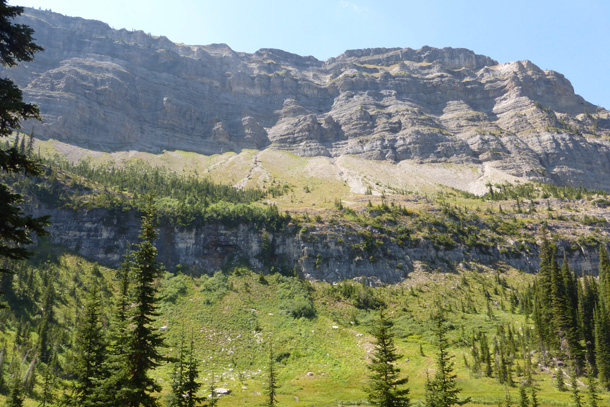 Cool rocky forms along the ridge

About 30 minutes later, the beautiful clear lake came into view and my spirits were lifted once more. I spotted a social trail leading up to a campsite that was already occupied. Howard was sitting on a log in the shade reading a book on horses. I approached him and we talked for a few. I alerted him to the fire that is apparently burning in the area where he and his buddy were heading the next day. He told me about a vacant campsite nearby, so I went for a walk to scope out the area. The site he mentioned was fairly close to where they were camped out and I could see their bear hang, so I decided to keep looking. There was another site by the lake, but it was right off the trail, so I noted its location and continued the search.

Something was pulling me up to the east of the lake and after a few minutes of wandering about, I found not only a tucked away site, but also a stunning view of the valley off to the east. It was an easy choice – the valley view sealed the deal. The theory is that I will wake up and watch the sunrise over the distant mountains in the morning. 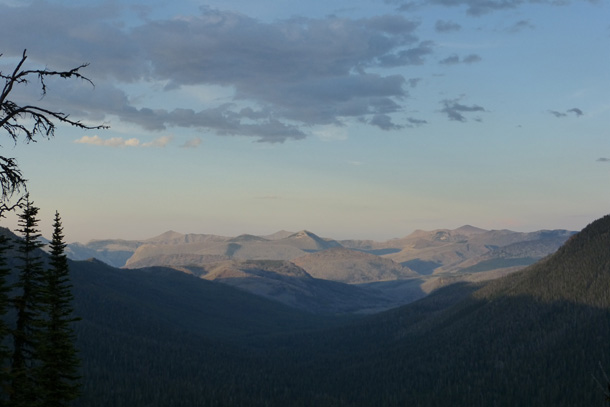 I went down to the lake to pump water and take another swim. The horse flies that had been bothering me were now a nuisance that was threatening to ruin the beautiful scene. There were bees, flies, and other flying insects all around, which is completely different from the pest free experience in Glacier. I elected not to carry insect repellent, as I’m usually not that bothered by them, but this has tested my resolve. 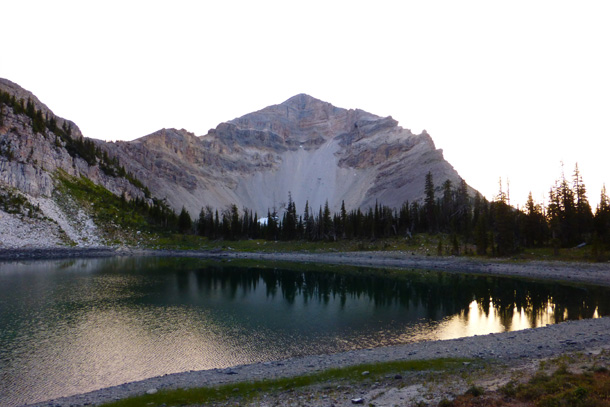 After the swim, I headed back to camp to pitch the tent and do some reading. The feeling of loneliness crept up on me and I started to really feel like I had come to a turning point on the trip. I knew I was in for an intense experience when I set out, but I didn’t fully realize just how lonely it could be in the wilderness without a companion. The loneliness eventually passed and I had a nice dinner and read while watching the sunset behind the valley. I kept finding more and more angles of pictures to take and went back down to the lake to capture the reflection of the trees in the water. 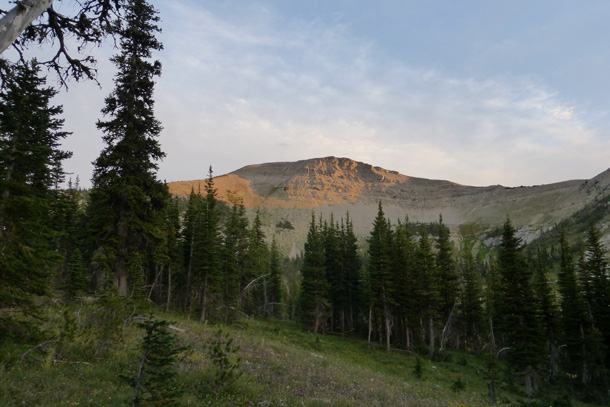 As night fell, I decided to turn in early in hopes that I would get up to see the sun rise over the valley. I left the rain fly off the tent as it doesn’t look like any weather will be moving in. The open tent makes for spectacular stargazing also, which is perfect on a night like this.