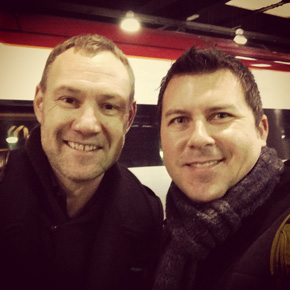 I’m sitting on a train en route to Liverpool from London with David Gray’s Mutineers playing in the headphones. As the English countryside whizzes by, I can’t help but think about what an incredible experience this has been for me.

A few months ago in Atlanta, I was sitting in Chastain Park Amphitheater watching David Gray perform in complete awe. I’ve seen him play several times before, but this show was particularly noteworthy. He had an energy about him that was significantly elevated from previous shows. Any list that I might have of my favorite artists living or dead would certainly have him toward the top.

I told myself during that show that I would definitely travel to see the show again if the opportunity presented itself. In fact, events conspired for this opportunity to indeed emerge. It started with a visit from 2 of my good friends from London back in September. We mused that I was way overdue for a visit to London (incredibly I had never been), and I said that I would plan a trip soon. A few days later, I got an email that David Gray had announced shows in the UK. I knew in that moment that I would go.

It’s true that there were other US shows that I could have booked if I wanted to see the concert again, but the idea of seeing this incredible performer on his home turf was particularly appealing to me. There were a few shows around the UK, but none in London. I would be taking a train to see it either way, so my attention shifted to the venue. A good venue can make a concert even more incredible, while a mediocre or bad venue can put a serious damper on a show, despite the talents of the performer. Alas, I decided that the Liverpool Philharmonic was the best of the lot, so I booked the ticket and locked it in.

3 days of enjoying London led to the eve of my trip to Liverpool. Perhaps foolishly, I had not booked the train ticket yet, but my instinct is to allow things to unfold as they may without any preconceived ideas of how it will go outweighed my desire to save a few pounds on the ticket. Late last night, I picked the train I wanted and booked it.

This morning, I awoke with plenty of time to pack my things and depart the lovely flat that I had been staying in since Friday. I had a leisurely trip to the train station where I had a croissant and coffee before boarding. Once the platform was announced, I scurried down to board and got in the queue. As I stood there waiting with my ticket, I looked to my left and David Gray was standing there waiting alongside me.

I called out his name and we chatted for a couple of minutes before we boarded. I told him about seeing him perform multiple shows in Atlanta over the years, and he remembered details about the venues, like the fact that Chastain Park is ‘loud’ – i.e. people tend to talk more than they listen there, unfortunately. I remarked that I vowed to see the show again as it was possible. He told me that this particular band he’s playing with is only with him for a few more shows, and that tonight should be a great show. He gave the venue a glowing review, I bid him farewell and told him that I’d see him at the show tonight.

I suspected this trip would be an amazing experience, but I couldn’t have predicted such a fateful encounter. ‘Like the birds of the high arctic’ plays in the headphones, and tears of joy well up in my eyes. It’s just so incredible what life has in store for us when we pay attention and let things unfold naturally. I couldn’t have asked for a better day if I had tried. There’s literally nothing that could make this better.