The Last Adventure of 2010 – Vermont and the Northeast Blizzard

Sunday night, I returned from my last great adventure of 2010.  This time, it was a road trip to Northern Vermont – the Green Mountain State.  However, on this trip, the mountains were pure white – covered in 2 feet of fresh snow. Awesome!

This was a significant trip for several reasons.  First of all, it was the first trip that I have taken in a long time that didn’t have a lot of activity set out in advance.  It was really a trip of getting away from the grind.  Letting go.  Disconnecting.  Absorbing in the moment.  Relaxing.  Opening up.

And by the way, it just so happened that the entire northeast region got rocked by a huge blizzard right before we left!  We had plans to leave on Monday the 27th, and the storm hit New England on the 26th and 27th.  So, we basically drove right into it, or followed it to be more accurate.

The day before we left, I paid very close attention to the weather forecast, and did a lot of prep work to make sure we were well prepared for what we were driving into.  We chose a route that kept us away from the heaviest of the snowfall, so the impact on our drive up was minimized.

Luckily, my traveling companion Whitney is as adventurous as I am and was not deterred by the storm and its potential impact on our trip.  Very few people would do what we did.  That’s what makes it so much fun!

I surpassed my personal driving record of 17 straight hours, and drove for nearly 21 straight hours from Atlanta to Vermont.  Yes, I know it’s insane.  I did it anyway.  We originally thought we would stop along the way, but decided to just go for it instead of stopping.

We arrived around 8:15am Tuesday the 28th in St. Johnsbury, VT, which is an awesome little town with a great vibe.  Our original goal was to stay in a cabin about 40 miles to the north, but when we arrived, the cabin was just too cold.  It was around 14 degrees outside, and inside the cabin wasn’t much warmer, if at all.  Our efforts to get it warmed up didn’t work out, so we opted instead to stay with Whitney’s friend in St. Johnsbury instead.  Wise decision, that one, as it didn’t get above freezing for several days!

It’s difficult to describe how incredible the experience was, or to accurately portray how beautiful the scenery was that we witnessed. But in the interest of sharing the highlights, here are some of the elements that made the trip memorable:

When we weren’t hiking in the snow, we did a lot of reading.  Whitney was reading his copy of The Art of Non-Conformity that I gave him at the beginning of the trip, which really got him inspired.  I started reading The Hero with a Thousand Faces, which I’ve been wanting to read for a long time.  I had a chance to sit in some book stores, diners, and living rooms during my time in Vermont and just read.  What a treat! 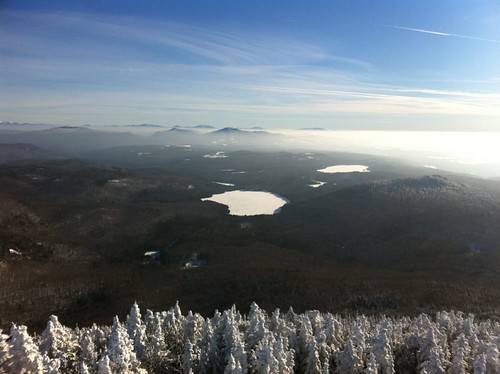 This was one of those trips that cannot really be put into words.  But the point I want to make sure that comes across is that this was a totally spontaneous, somewhat erratic trip that sounds insane to most people, but it was incredible!  If we had taken the ‘safe route,’ we might not have gone at all.

Oh, and I managed to not check email for 6 whole days!  Aside from responding to one tweet, I didn’t login to Twitter either.  The only thing I did was post a few pictures to Facebook so that my Facebook friends could see some of what I was up to.  It was great to disconnect, and I definitely encourage people to take this kind of digital hiatus from time to time.  It really does make a big difference.

So, that was my last adventure of 2010.  What does this bring up for you?  Do you have any fun stories of serendipitous travel and adventure to share?

2010 – A Year of Learning, Growth, Transformation and Adventure