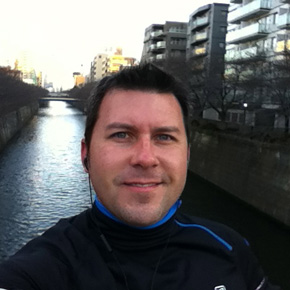 Life sometimes provides us with opportunities that we could never imagine for ourselves and it’s up to each of us to take each one and seize it.

I’m typing this on an airport shuttle bus bound for Tokyo’s Narita airport for the final flight of a round-the-world trip for a client that began in mid January on the sunny beaches of Santa Monica. Since then, I’ve had a chance to slip on my sneakers and take off running in some truly incredible places on this beautiful blue planet.

In just over a week, I’ll be running in the Hunger Walk/Run in Atlanta for the second time. I’ve become a bit hooked on running I must say, so when the opportunity to test my pace in Europe and Asia in the dead of winter presented itself, I embraced it with excitement. I suppose it’s the best training I could ask for, as Atlanta winter is nothing in comparison to the places I’ve been for the last month and a half. Side note, it turns out that people do run while its snowing in Hamburg, but nobody runs on sidewalks in downtown Seoul, snow notwithstanding.

Some highlights from this trip include the following:

Santa Monica Beach – I had a chance to do a short run along this beautiful beach during a rare mid-afternoon break from field work. This would be the last run in shorts and t-shirt on this trip.

Dallas – as long as I can remember, I’ve been fascinated by the JFK assassination. Twice I had a chance to run through the infamous Dealey Plaza and contemplate the shift that occurred on that dismal day in November, 1963.

Paris – my colleague and I took off for a run in the park adjacent to the Louvre on a sunny, but chilly winter afternoon. Lesson learned: crosswalks with vehicle traffic take priority over pedestrian-only crosswalks.

Hamburg – undoubtedly my favorite run was also the coldest and longest run around the Außenalster. The temperature hovered right at freezing with a few stray flurries along the route. The partially frozen lake provided a gorgeous backdrop for runners of all ages that were out on the 8km loop. I completed 5 miles before returning to the warmth of the hotel overlooking the picturesque lake.

Seoul – arguably the least researched run of the trip, I planned to run in what looked like some kind of nature preserve on the map, but I lacked the 1000 won required for entry. Alas, my Westin hotel room key was not accepted as currency. I had to run on the sidewalks instead. I got my share of odd looks as I was the only nut job running through the busy downtown streets in the middle of the day. Bonus lesson: not every intersection has crosswalks where you need them.

Tokyo – the day of our arrival in Tokyo, I went it for a short run along the ‘river’ (more like a canal – see photo above) near the hotel. After a couple of pauses to cross the street and stay on the mostly deserted path, I elected to only put in 3 miles. Ok, so the headwind and the long steady hill going back might have played a role in my decision to call it early.

The only city I didn’t run in was Moscow. I wasn’t in the mood to tempt fate by running on icy sidewalks with my minimalist slick bottomed running shoes. Call me crazy, but it just didn’t feel right. Evidently the outdoor exercise of choice in Moscow during the winter is actually ice skating in the public parks, which are converted to huge skating rinks for  citizens to enjoy during the bitter cold months. Also, older Moscovites can really cut a rug! We happened upon what I can only describe as a huge winter dance party in the park where well over 100 smiling seniors danced together to pop techno (I’m totally serious) while the youngsters led the crowd from the main gazebo. 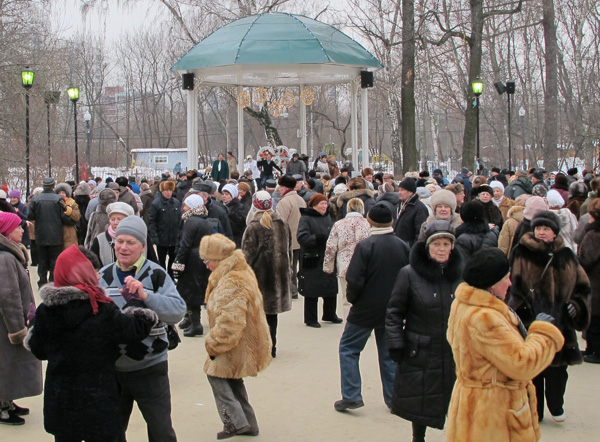 I don’t know that anything made me smile as much as that moment did. In the sub-freezing brisk weather, people came together and celebrated life amongst snow drifts and thousands of happy ice skaters nearby.

Each run on this trip provided me an opportunity to overcome the inertia of wanting to rest from the hectic schedule and push myself beyond the comfort or the warm hotel room, get out in the cold and move my body. I have a renewed drive for this, as I’m raising money for the Atlanta Community Food Bank in memory of my late friend, Jeremy Smith who passed away a week after last year’s Hunger Walk/Run. I’ve written about the impact Jeremy had on my life before, and I’m definitely pushing myself to go further in my effort to honor his memory through my run and my fundraising. His smile still lights up my life whenever I think of him.

I was asked to serve on the committee for the Hunger Walk/Run this year and despite bring on the other side of the world, I’m keeping up with the important work of the ACFB with an eye toward helping those who are not fortunate enough to have anything remotely resembling the experiences I’m fortunate enough to enjoy.

I consider myself an optimist by nature, and I do my best to smile in just about any situation I find myself in. I’m smiling today, because I get to sleep at home tomorrow for the first time in a month. I also have access to fresh, healthy food when I want it. I can tell you right now, many of our fellow citizens are not so lucky.

As I prepare to honor Jeremy’s memory and return to my ‘normal’ life in the US, will you please help me reach my fundraising goal for the Hunger Walk/Run? It really means the world to me, and to so many people out there who don’t know where their next meal is coming from.

Thanks for your help! What are you supporting these days?