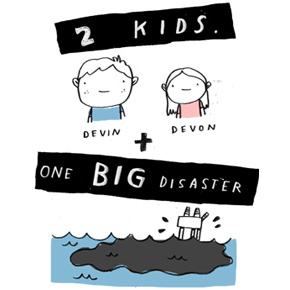 Last Spring when the BP Deepwater Horizon rig exploded, like many others I felt an immense sense of loss. Loss of life. Loss of habitat. And to some degree, a loss of faith in humanity.

I recall a friend of mine showing me photos on his iPhone just a few days after the explosion.  He was in town for his birthday and although I knew he worked on an oil rig, I didn’t know just how close to home this hit him.  He was on the rig right next to the Deepwater Horizon, and he was showing me photos of the unfolding disaster he had taken with his phone as the inferno raged a short distance across the water.

I knew I had to go down to the Gulf to help in some way.  I had no idea what form that would take, but noble images of cleaning oil off of pelicans’ wings did come to mind a time or two.

It turned out that the way I served was to witness.  But not the oil spill itself.  I was called to witness the plight of the people who struggled in the coastal communities that were directly impacted.  This calling changed my life in ways I can barely wrap my head around today, and Spirit of the Gulf Coast continues to be the work that I am most proud of out of everything I’ve created and contributed in the world.

Earlier this Summer, I was contacted by a 7-year-old girl that volunteers with the Ian Somerhalder Foundation and heads up the Kids Army on Twitter. Devon explained to me that she was planning a trip to New Orleans in November along with 13-year-old Devin from the Kids Army Texas division and they both wanted to help with the oil spill.

Similar to my thoughts of cleaning oiled pelicans, Devon and Devin had the idea that they would go down and help the beach cleanup operation. Kim from ISF suggested they speak with me due to my experience on the Gulf last Summer, and instantly the ideas for a documentary film focused on kids and families along the coast began to emerge.

Today, I’m proud to announce the launch of a fundraising campaign for Kids of the Gulf – a documentary film that will chronicle the journey of Devon and Devin as they come together and travel to the Gulf coast to witness the impact on kids just like them. It’s a journey of discovery, sharing, and inspiration for not only the kids that are directly affected, but for kids around the world that see kids just like them speaking out about an issue that they believe in.

In April of this year, I visited the Gulf coast for the 1-year anniversary of the Deepwater Horizon explosion, and what I heard again and again was that kids and families were still enduring an enormous amount of stress as a direct result of the oil spill. The rest of the world might have moved on, but those who struggle to put food on the table, suffer from suspicious illnesses, or who are still scared to walk on the beach or eat seafood from the Gulf are not able to switch the station so easily.  They are stuck on this channel, and like a TV with bad static in the signal, it’s a highly disruptive experience. Nothing, and I mean nothing I’ve ever experienced directly has had this much of an impact on me.  I wanted to bear witness to this tragedy in the hopes that it would help usher in a dialogue on energy conservation, personal accountability, renewable fuel, and the like. I still believe it’s possible to learn from the BP spill, if we’re willing to listen and learn.

Devon and Devin have renewed my hopes and my faith in humanity by their burning desire to help the region that has suffered so much in the past year.

Today, I’m asking you to honor their desire to make a difference and contribute to help us make this film.

Beyond making a film, the support you give today will literally help to inspire millions of kids around the world to speak up and get involved with issues they care about in their own communities. We intend for this film to be shown on network TV in the US and also be available as a feature film for kids around the world to watch and learn from. The film will be entered into the major film festivals, and shown via public screenings around the world.

These kids are changing the world, right now. Will you help them?

Watch the video and please click here for the support page. There are some really cool rewards for those who contribute to the production.

But most of all, the reward of knowing you helped kids realize their dreams of making a difference and inspiring other kids around the world is its own reward.  How can you put a price on that?

Special thanks to Kim, Ian, and Stephanie at the IS Foundation for your unwavering support as we gear up to produce this film. I have nothing but the utmost respect for the work you do every day.

Lead Without Followers – a conversation with Dave Ursillo