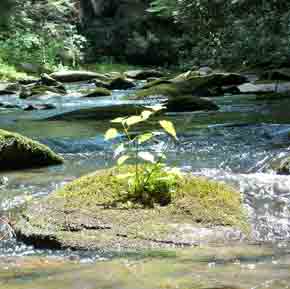 3 months ago, I flew to Singapore on a business trip and was fully expecting to have in-flight internet access on the plane. In the hours leading up to the flight, I found myself putting certain tasks off until I was safely nestled on the plane. The thinking was, ‘oh I’ll have plenty of time for that when I’m on the flight.’

Imagine my surprise when I opened up my laptop on the plane and had no WiFi service. 2 flights and 25 hours of travel with no connection to the world below forced me to be with some questions that had been nagging me for some time. It was the best forced downtime I’ve had in quite a while. A month later, I was more than happy to leave my phone in the car as I embarked on a beautiful 3 day, 25 mile hike in the Cohutta Wilderness. Not so much as a thought of the internet crossed my mind during that incredible, awe-inspiring trip. A feeling of aliveness permeated the entire weekend as the rushing sounds of the Jacks River and the native wildlife of the Cohutta Wilderness filled the clean mountain air, and by the time I turned my phone back on on the drive home, a much needed respite from digital life had allowed some amazing experiences to manifest while being 100% present in the moment.

I actually have a strange relationship with digital media. It’s been a critical piece of my world and my livelihood over the past decade or so, but I’m just as keen to turn it off from time to time and focus on what’s happening in the physical world around me.

For me, Facebook, Twitter, and other social networks are nice tools to connect with others, but they are by no means the center of my reality. Often, I’ll go days without checking either of these accounts, particularly if I’m immersed in something I’m really excited about. It’s not that I’m anti-social, but boundaries are important and sometimes I feel that drawing the line is healthy for me.

Ironically, I’m uber-connected right now as I write this at 36,000 feet above the US on my flight to Portland for the World Domination Summit. WDS was an incredible experince for me last year and I met some of the most incredible people through connections made through Twitter.

It’s a choice to be connected right now, but I guarantee that I wouldn’t be nearly this excited if I had not taken the time to step back over the past few weeks and experience some of the world around me while offline.

When we land in Portland, a weekend of mass-connection will ensue. The mixture of Twitter connections with fellow WDS attendees, face-to-face meetups with friends old and new, and the offline time during the conference sessions will blend together to create fertile ground for ideas to flourish on how to live differently in this hyper-connected world.

Connections will occur, friendships will form, and a burgeoning community of game changers will experience a weekend of unlimited possibilities for creating something special in the world. But we all have to step away from our computers and stop looking at our phones for it to happen.

In the end, we are all connected to each other all the time anyway, but we make choices on how we allow those connections to manifest in our daily lives.

What about you? How do you balance your ‘connected’ life with life in the physical world?