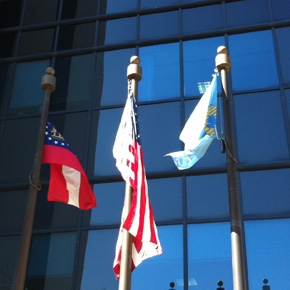 I couldn’t believe what I was hearing.  Did the judge seriously call juror number 20?

Tuesday morning, I reported for jury duty, prepared to plead a hardship case on why I could not serve on a jury this week. Believe me, I had several really good reasons. In fact, you might even say that this week was the perfect storm of conditions that made one more commitment (much less one of this size) totally inconceivable.

Not only was I picked for the jury, it was a trial jury expected to last at least 3 days and possibly longer.  I did not handle it well.  In fact, I handled it about as poorly as I’ve handled any news in the last few years. I vented, loudly, and to multiple people who were counting on me to be at my very best this week. People who had put their faith in me to look after their child, their home, their dog, their business, and in some cases, their dreams. I was like a deer in the headlights and felt totally hopeless.

My freak-out session lasted the better part of 2 hours, until I finally got a grip and realized, with the help of some well-timed tweets from people I greatly admire, that I needed to slow down, right then and there. I actually didn’t have a choice in the matter – I had to slow down.

A perspective on the situation began to emerge that helped me over the course of the 3 days I was on the jury.

Don’t get me wrong – I was still pissed about being there.  Out of the pool of 30 potential jurors, I was the only person that plead hardship.  I thought for sure I was going to be excused. But it was not to be.

Eventually, I surrendered to the reality of the situation and started to accept what was happened as perfectly timed, not the worst possible scenario. I thought about the 48 countries that supported Kids of the Gulf and how some of the people in those countries would give anything for the opportunity to have their case heard by a jury of their peers. It helped to keep this in mind.

The 3 days I spent on the case, I was often preoccupied during recess by circumstances that were well beyond my control. I thought about the production meeting for the film I was unable to make on Wednesday, and the business I was trying to assist after my friend’s sudden passing 2 1/2 weeks ago. I thought about my own financial situation and how this week was a critical week to bring in some new business.

But the thing is, all of those things together pale in comparison to the stakes in the case that I was charged with jurying. I’m not going into the details of it, but I will say that it was a civil trial and the damages done were substantial, and our jury awarded a significant sum of money for compensation.  As I type this now, I know for a fact that I made a difference.

Monday afternoon, I was on a call that I facilitated and the topic that we covered was based on something Neale Donald Walsh tweeted that morning: “I have seen what I absolutely thought and was the end of everything turn into the beginning of a life of which I could only have dreamed.”

I’m not saying jury duty was a dream, but I can say with certainty that when I was first sitting in that jury box in total disbelief, it felt like the end of everything in that moment. Today, I’m proud of my service, and I’m happy with the opportunity to participate in the process. It was my time to serve.

Sometimes in life, we get so hell bent on a specific outcome or course of action that we forget to be flexible and let life unfold as it will. We think we have it all figured out and we just need to keep pushing ahead.

I know for certain that I need a big slap in the face from time to time to put things into proper perspective. I got one this week, and it’s greatly appreciated.

Have you ever been in a situation where you felt totally hopeless, only to find out that it was one of the most rewarding experiences of your life? How did you handle it?