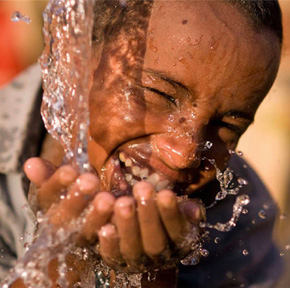 2 weeks ago, I sat in the beautiful Newmark Theater in Portland, Oregon as I listened to Scott Harrison of charity: water describe his story and the history of this incredible organization. Like me, Scott spent many years in the nightlife scene and saw enough sketchiness to last him a lifetime. Yet, after all the years of drinking, drugging and everything in between, Scott had a realization that he wanted his life to stand for more than just a stream of good parties.

Scott spent time in West Africa alongside volunteer doctors who were treating hundreds of patients a day that would otherwise have endured unimaginable suffering from a variety of maladies. The suffering he saw took on a new meaning as he realized that even after these people were treated for their illnesses, many of them lacked access to the most basic life-giving necessity, water. Scott set out to change that.

I was fortunate to have the chance to hear Scott speak for an hour about his past and how charity: water got started. One of the things that differentiates charity: water from other non-profits is their relentless commitment to transparency and accountability to donors.

Even more, 100% of the donations that come in to the organization go directly to drinking water projects around the world. Operating costs are covered through sponsorships and other philanthropic funding, leaving the public donations free and clear to help provide clean drinking water to communities across the globe. Donations are tracked down to the individual well and donors are able to see how their money has helped change lives by logging into the campaign and checking on its progress. Check it out – it’s very cool!

As Scott concluded his talk in Portland, he mentioned one of the organization’s most engaging ways of raising money, the birthday program. Instead of receiving gifts for their birthday, people can ‘donate’ their birthday to charity: water and help fund water projects that bring life-sustaining water to those who need it most. He asked the crowd of 1,000 to stand up if we were willing to donate our next birthday to the campaign. Like nearly everyone in the theater, I stood up, so here we are.

I’m donating my 38th birthday to charity: water and I hope you’ll help me in my very aggressive goal of raising $5,000 for the campaign. Can you donate $38 today to help me get there? https://mycharitywater.org/the-game-changing-birthday-wish

I’ve got 2 more stories I’d like to share that reinforce why this is so important to me. 2 years ago, I was planning my trip to the Gulf coast to help document the oil spill’s impacts on local communities along the coast. I didn’t have the money to do it, and had no idea what I was going to do once I was down there. What I knew is that I felt called to serve and I made a commitment to answer that call, no matter how small the first step might be.

On the eve of my birthday, I realized that I had the potential to ask my network of friends and family for support in helping me with this cause that was (and still is) so important to me. I recorded a short video asking for donations, put up a blog post and posted it to Facebook. I hoped that I could turn some of the ‘Happy Birthday’ messages into donations to my campaign to raise money for the trip to the Gulf.

The next day, as people posted Happy Birthday messages to my Facebook wall, I replied to every single one of them with a link to the blog post and my birthday wish. People began to donate to the cause, which lead directly to Spirit of the Gulf Coast, which in turn lead to Kids of the Gulf. It would be impossible to calculate how many lives have been changed as a result of this chain of events, but it gives me chills just thinking about it.

The work on this project continues, and the potential to create meaningful change in the world is greater than ever – far surpassing anything I could have imagined 2 years ago as I sat alone in my bedroom seeking a way to make a difference. Let that one marinate for a minute. Next, I’d like to share an email I received from charity: water on July 29, 2011, one day after my 37th birthday. The subject line of the email was ‘We’re Inspired.’ I saved that email because it absolutely blew me away, and I refer back to it again and again when I need a dose of inspiration or faith in humanity.

charity: water has had an amazing 10 days.

Last Thursday, we hit water in a village called Moale, deep in the Central African Republic. This was the site of our failed Live Drill on our fourth anniversary last September.

Moale had been waiting for a clean water source for more than a decade; we were so excited to be there when it finally happened.

We returned from C.A.R. to find another story starting. A sad story, but one of the most inspiring in the history of charity: water.

A young girl named Rachel Beckwith heard about charity: water through Eastlake Community Church in Seattle. She was inspired by the message and decided to give up her ninth birthday to raise $300, which could give 15 people access to clean water. She raised $220 by her birthday — not a small amount of money for a nine-year-old!

On our way back from Central African Republic last week, we heard the tragic news that Rachel was involved in a car accident on Interstate 90 in Seattle. On Saturday night, Rachel’s life support was turned off and she passed away.

Rachel’s family reopened her birthday campaign so that people could honor her with a donation. The response has been nothing short of incredible. Her family, friends and wider community took on the campaign in Rachel’s memory. In turn, local and then national and international media picked up the story.

Just as inspiring as the donations have been the comments people have left on Rachel’s fundraising page (https://mycharitywater.org/rachels9thbirthday).

Here are a few that stood out to us:

“In honor of hope, that we may have it no matter how old or how young we are.”

“Please know you not only made a difference in those who will receive the hope from charity: water, but you also changed my life, and thank you so much for that.”

If you go to Rachel’s page now, you’ll see that her campaign ended up raising $1,265,823! This is a staggering sum, but beyond the money generated and the water provided to those who are thirsty, I’m inspired by the reactions of the people who have seen this campaign and been moved by it. The three quotes above give us a glimpse of how what we choose to do with our lives can have a profound impact on other people who we have never met.

And that is how change happens. One gesture. One person. One moment at a time. ― Libba Bray At the end of the World Domination Summit 2 weeks ago in Portland, Chris Guillebeau stunned the audience with an investment in each of the attendees. He gave us all $100 to invest in changing the world however we thought was best. I’ve written about this experience at length here and here if you care to read more.

I’ve decided to invest my $100 in my charity: water birthday campaign to jump-start things. If 49 more people follow suit, I’ll meet my goal. Even if you can’t donate $100 or $38, can you donate $20, $10, or even $5? You’ll be able to track where your donation goes and see how you’ve helped provide clean drinking water to people who lack this basic necessity.

Thank you so much for your help. Together we can move beyond the pain and the sadness plaguing our national consciousness right now and do something that we can all feel good about.

Will you consider following in Rachel’s footsteps and donating your next birthday to charity: water?  If so, here’s the link to get started.