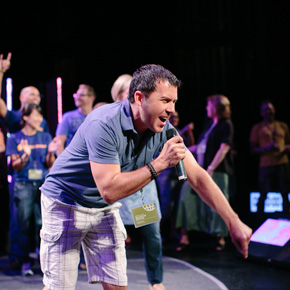 Just over a year ago, I attended the inaugural World Domination Summit in Portland, Oregon, which would come to be an experience that motivated and inspired me in ways I find difficult to fully convey. This past weekend, I returned to beautiful Portland for the second WDS, and it was nothing short of magical for me. Allow me to take you on a journey, if you please.

I will never forget walking into the Portland Art Museum last year on the first morning of WDS and seeing Chris Guillebeau’s welcoming smile (the conference creator) as he asked me if I would go down to the front row and help fill it out shortly before the first presentation began. Never one to argue with one of my biggest personal heroes, I happily obliged. I wrote about that mind blowing experience at length here, but what I didn’t share in last year’s recap was the knowing, the knowing that I would be on that stage the following year.

A few weeks ago, Chris sent out an email to WDS attendees asking for people who wanted to share their stories from the main stage to let him know. Admittedly I didn’t put much weight into the possibility of being chosen, so I hurriedly filled out the form and went about my day. A week or so later, Chris replied to an email completely unrelated to WDS saying that he wanted me to share the story of Kids of the Gulf with everyone at WDS 2012.

Have you ever had one of those moments where you knew that your dreams were coming true and it was so overwhelming that it froze you in your tracks? Well, that’s what it felt like. Out of over 300 submissions, mine was selected to be featured alongside 12 other remarkable stories of my fellow change makers. I was stunned, excited, and a whole host of other emotions all at once. But perhaps most of all, I was grateful. Grateful for the opportunity to share the story of an awe-inspiring movement of young people that has energized me and called me to service so deeply over the past year.

More on that later.

This year’s WDS was twice the size of the inaugural conference (1,000 people this year), and I figured the odds of getting a front row seat in the beautiful Newmark Theater were pretty much nil, but nonetheless, we gave it a shot. Lo and behold, Matthew and I secured two seats at the left side of the stage on the front row, right in front of a gorgeous hand crafted large wooden globe. Nice! A few minutes later, the event’s super-producer, Michelle, informed those of us in the front that we were going to be asked to participate in the opening presentation and that was our chance to move seats or prepared to get up in front of the audience. I recalled Pam Slim’s martial arts demonstration at the kickoff of WDS 2011, so I figured there was a good chance that physical activity was in store. A couple of minutes later, Michelle came back over and asked me if I would mind if Chris Guilllebeau handed me a microphone during the mysterious activity. Not one to say no to my aforementioned hero, I said enthusiastically ‘sounds great.’

Chris introduced Brené Brown shortly thereafter, who kicked off the incredible weekend of talks and workshops by getting us to think about the concept of embracing vulnerability. I was unfamiliar with Brene’s work, but her talk was eye opening and thoughtful, and it set the tone by inviting each of us to let down our guards a little bit and allow ourselves to be in each moment and enjoy it for what it is, without a defensive, fear-based posture.

Toward the conclusion of her talk, they asked the front row to join Brené on the stage, and as we were walking up, she (or Chris, I honestly can’t remember because what happened next was so crazy) told the audience that we were going to do something that would help us all believe in ourselves more (or something to that effect) by doing a live rendition of a Glee performance. All of the sudden, the dots all connected and I realized what was about to happen. Ummm, holy s@%&! As surely as I write this, the music started, and Journey’s massive hit song, Don’t Stop Believin’ began to play. Chris got the crowd started as the rest of us provided backup. A few lines into the song, Michelle nudged me forward and Chris turned around and handed me the microphone.

This is probably a good time to mention that I’m not a fan of karaoke, have never sung karaoke, and haven’t sung in front of people since I was a little kid in church.

But there I was, on stage with a live microphone and 1,000 people singing along to one of the songs that defined an entire generation. After the initial shock wore off, I embraced it and really got into the groove. The music carried me away to a place I never knew existed, and the inner performer in me assumed the role.

Lunging forward to reach out to the crowd, the words and emotions poured out of me like a raging river. It was something I never in a million years expected, but wow did it kick off the weekend with a bang. Talk about vulnerability! Did I mention that this was 100% unscripted, and I had absolutely NO idea it was going to happen until it was in progress?

I share this for a couple of reasons. Mainly because it had a big impact on me and it was an experience I will never forget. But also, tracking back to the feeling I had last year about being on the WDS stage, on some level I never stopped believing it would happen. Of course, I didn’t expect to be up there twice in one weekend, let alone leading a filled-to-capacity theater in a sing-along to one of the most popular songs in history.

To Chris and Michelle, I give my endless thanks for this absolutely incredible experience, and to the entire WDS action team I offer my praise and gratitude for another unforgettable experience that will no doubt change the world. Thank you all!

On the flight home from Portland, I crafted a post about the actual talk I gave on Kids of the Gulf and Chris’s stunning act of generosity at the end of the weekend over at KidsoftheGulf.com. If you would like to hear more about my second, more profound stage performance and the incredible gesture from Chris that will have a massive impact on people around the world, I invite you to check it out. And I really hope you will!

There were some remarkable shifts in my life in 2010, and looking back on it now, I’ve had tremendous faith in the meandering path that’s unfolded in front of me over those past 2 and a half years. At times, it’s been extremely challenging to keep believing in the work that I feel so deeply called to explore, but I’ve kept my focus on making a positive, lasting impact on the world with a desire to make the most of every day I have here on earth.

Many times along the way, it would have been easy to question the path or to give up on my dreams. But I didn’t. And I won’t.

I’ve been asked in the past what my greatest fear is. I’ll share it with you here. My fear is that I won’t do enough or use my time on earth to its fullest potential. There are huge issues that need attention on this planet that we call home, and I feel called to serve and to share my perspective and my vision on some of the biggest challenges that humanity faces.

That’s my greatest fear, however this past weekend helped support feelings I’ve had about the purpose of my life that began to emerge many years ago. I’ve been given an incredible opportunity with this life, and I intend to make the most of it. I believe I’m on the right path.

What about you? What do you believe about yourself and the path you’ve chosen that you might need to shine some light on?