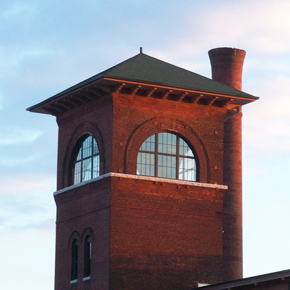 Last Summer, I wrote about being on the edge of the cliff at a time that I was 100% certain I was going to be moving out of my home within a week. In that post, I discussed the range of emotions I was going through as I prepared for that transition.

The thing is, it didn’t happen.

But it is now.

Before I go on, I’d like to offer a free lesson on selling or leasing real estate: It’s not done until the check is in hand. Period. Class dismissed. This loft was basically a revolving door last Summer and Fall, with multiple buyers, interested renters, and property investors going on and on about how much they loved the place and how they were eager to move in ASAP. One by one each of these fizzled into oblivion while I was left feeling defeated and confused.

After all, I live in a seriously kick ass loft that is not something easy to replicate anywhere else. Nonetheless, the options that were on the table were just not right.

Finally, in November I accepted an application for a tenant that wanted to sign a lease and move in early February. And here we are.

For 3 months, I’ve known that this was happening. The difference this time being that there was a signed document and security deposit. Done deal.

My ‘go with the flow’ mentality is being put to the test right now, and in 4 days, we’ll see just how easy-going I am in actuality. I’m staying with a friend nearby that has an extra bedroom while I figure out what comes next for me. In effect, I’m going from living alone in a 1500 square foot loft that also doubles as my office to a 10′ x 10′ room in a condo with 2 other guys.

Yep, this is going to be a big transition for me. Huge, actually.

For those of you who have followed along for a while, I still have my eye on Portland, but there is some unfinished business here that needs to be sorted out before I make any big moves. Who knows what will happen this Spring and Summer though – we’ll see.

In the past week, I ‘ve gone through a process of purging and discarding 2 decades worth of files, paperwork, etc. that had accumulated in well-hidden places in my office. This is the 3rd purge I’ve done on this scale, with this one actually getting to the last of the ‘stuff’ that’s been hidden away carefully in boxes, files, etc.

My carefully organized, orderly desk was piled high with papers to be shredded, while boxes of recycling and bags of previously shredded files formed a border that started feeling like a fortress over the course of 4 days.

Needless to say, this took a LOT longer than I anticipated.

It’s exciting to know that I don’t have to do this again. No more paycheck stubs from jobs I had in high school. No more tax booklets from the 1990s. No more return envelopes from utility bills I had from 5 apartments ago.

Eliminating the old crap I had been carrying around with me was a massive undertaking. Although the volume of stuff wasn’t that great, and could easily be boxed up and moved on to the next place, I wanted to deal with it once and for all. No more hiding stuff in files and boxes. It was time for it to go.

So, in just a few days, I’ll pack up the remaining stuff that I’m taking with me and move my pared down belongings to Midtown where I’ll rest my head for a bit. I’ll share more about this process as it unfolds, but for now, I’m feeling pretty good about it.

This is a big experiment for me and the results are likely not going to be known for a few months. But I’m willing to give it a shot.

What about you? How does this compare with what you’ve experienced in your own life? Are you making any big leaps this year?